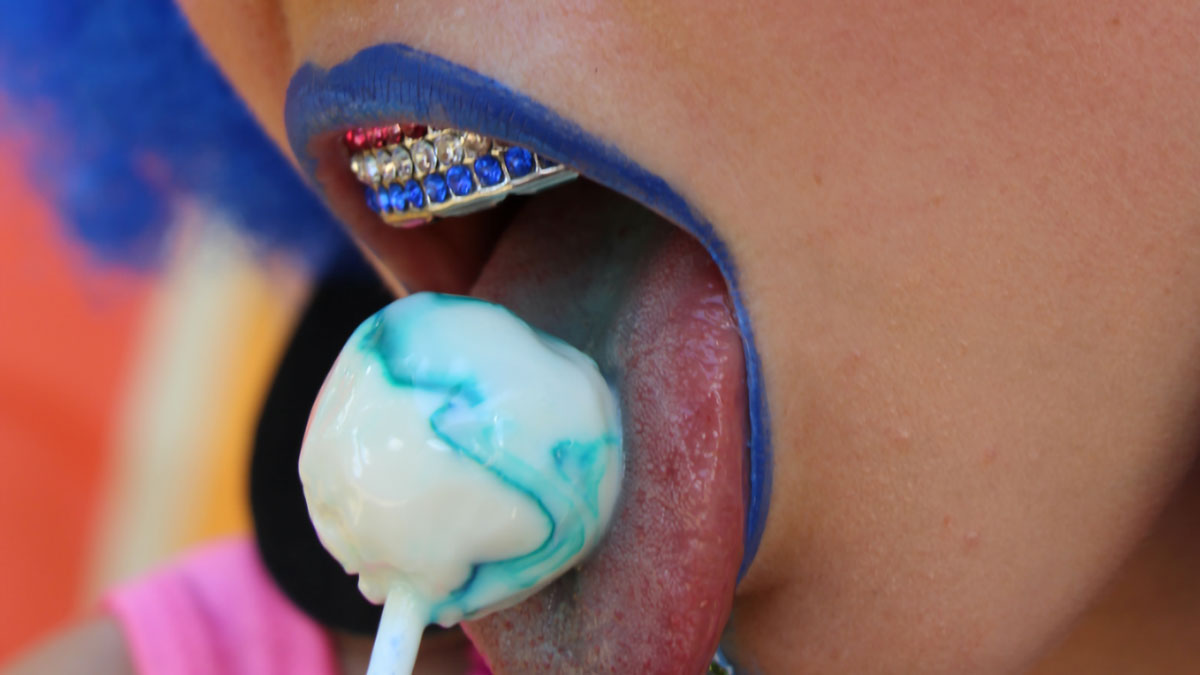 $8
from Lollyphile »
Check It Out

Should I have filed Blue Cheese Lollipops under the Gross instead of the Candy category? I guess it depends on how you feel about blue cheese. And lollipops. About mixing sweet and savory. About stinky suckers. About the equivalent of sucking on an entire barnyard after a sugar snow.

I mean, all things considered, I think I chose right. It's candy. I'm in.

According to Blue Cheese Lollipop maker Lollyphile, this sucker started out as a joke. And even once executed no one want to try it. The honor went to Maria, the poor model in the photos above. Lollyphile says she said, "Oh! It's awesome!" and that they figured she was lying. I bet they're all lying.

I bet Blue Cheese Lollipops don't even exist. Lollyphile probably just Photoshopped the photos of their delicious Bourbon or Frosted Cereal Milk lollis into the queasy-making cotton candy blue and white swirl of Roquefort you see here, figuring they'd draw attention, but that no one would ever actually try to order any.

If you want to call their bluff, Lollyphile allegedly sells the Blue Cheese Lollipops in packs of 4, 12, or 36. And if they do indeed arrive, there is a bright side: a fat pack of the cheesy stick candies would make a great (and literal!) gag gift for the office, or this year's trick-or-treaters and Halloween party.

Mama! I said I only want the Cherry Starburst! Only the Cherries! Ahhh, just remembering the days when my mama had to toil over picking out all the good Starburst, Skittles, and Tootsie Pop flavors for me. The days before...

Oh good, now all the Kandi Kids kids can practice responsible oral hygiene when they're high on Molly at the EDM festivals this summer. Your own little ones might love them some brightly-colored, fruity-flavored Loloz...

I have a lot of good news and a lot of bad news about the Gincredible Dipper, basically a take on Fun Dip that incorporates real, boozy elderflower gin in gel form. Let's start with the good...

Yes, it's the rooster sauce hardened, domed out, and mounted on a stick. Sriracha Lollipops: where cocks become balls. Online 'pop shop Lollyphile has turned everyone's favorite liquid fire into a lickable creation that...

The lollipop storage conundrum is solved! Jonathan Adler's Mohawk Lollipop Holder meets the needs of the masses befuddled over how best to store and display all of their...one, two, three, four, five, six, seven...seven...

Oh, would that they were made of real breast milk...that would be F'ing sick. But in the grand spirit of edible items simply modeled after choice body parts*, the Lollyphile's Breast Milk Lollipops don't contain actual...

Death Star Lollipops. An excellent concept. And might I suggest throwing some Pop Rocks in there too during a suck session so they actually explode in your mouth...

The scientific community may have dogged Pluto, but these Solar System Suckers are paying the little outcast the homage he deserves. My Very Educated Mother Just Served Us Nine Pizzas, plus the Sun, all hold a place in...

Hmmm, what do you think, is that picture Photoshopped? And if it isn't would you consider having a pinky-sized chunk of your cheek Stretch Armstrong-ed a foot away from your face: 1) relaxing; and 2) $81 well spent?...

Sometimes I wonder what I'll do if one day I don't want the Kraft Mac & Cheese my mama or Bob Evans serves me. Like, what if I want Kraft mini wieners* & cheese or Kraft Jet-Puffed Jumbo Mallows & cheese? Or, screw all...

Huh. I woulda thought scented candles would be something they'd make to cover up the smell of McDonald's Quarter Pounders in your home. But I guess that's if you're making candles for wives and mamas who don't want aromas...

From whence does this Raclette personal cheese melter come? For those unfamiliar, Raclette is both a big ol' hunk of Swiss cheese, and a Swiss method of melting layers of the cheese over a fire, and scraping them off...