Bacons of the World Sampler 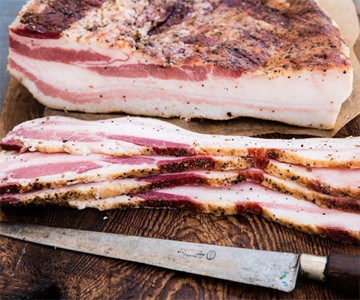 I would call Belcampo's Bacons of the World quarterly sampler pork crack, but in this case, I think it would allude to an entirely different--yet still likely very tasty--part of the pig, rather than the addictive, euphoria-inducing belly, cheek, and loin slabs actually included in the shipments. Nonetheless, holiday shoppers should prepare to have loved ones go giddy and glassy-eyed, and possibly hug the hearts right out of their chest cavities, when this Christmas they receive the gift of hog heaven.

The Bacons of the World pack arrives in 4 shipments, each containing 5 pounds of bacon split between the hearty American classic and a slab from another part of the world. Belcampo's pork hails from organic, pastured Ossabaw-Berkshire pigs the produce flavorful meat and balanced fat. Batches ship in January, April, July, and October.

With January's shipment also comes the Italian guanciale, a savory, unsmoked cut from the pig's cheek. It is described as a worthy base for cooking pasta all’amatriciana or beef stews.

In April, the hearty fry bacon will be accompanied by English bacon, also known as "back bacon". It is butchered from the pig's loin, with the belly attached, so that each slice of bacon also doubles as a pork chop. Uh, that sounds like a bacon-chop fusion. Bacon-chop conjoined twins. In other words, that sounds delicious.

When the stifling heat of July hits, you'll be able to cool down...or at least sweat pork...with your third shipment of America's meat of the gods, plus some Italian pancetta, an unsmoked, rich hunk of bacon that enjoys show-stealing guest appearances in pastas and roasts. Finally, as October's leaves flit to the ground in piles of brittle deadness, your cap-off pile of scrumptious deadness will arrive, this time with a holiday bacon, coffee-rubbed for an extra smoky, earthy punch.

Bill Gates, you put out an open call. You asked for the "next generation" in condoms. A design that will revolutionize safe sex practices by making the peen sheaths more desirable to wear. Men and birth control in third...

I don't really like to shoot to kill--less due to the ethics of felling a majestic beast than the fact that blood and rigor mortis make me squeamish--but I think if given the choice between taking down a deer or taking...

When we, collectively as Americans, stumble onto something that catches on with the unintelligent majority, we immediately begin the process of running it into the ground. See: The Kardashians, Myspace and... bacon flavored...

Does your dog do back flips for bacon? Freak out over flying discs? Well, imagine the total spastic meltdown he's going to have over this bacon-scented rubber flying disc from Kobe. Bacon and fetch together! The Great...

Whole wheat in the toaster, bacon in the...other toaster, a yank of the iceberg, a slice of the tomato, and mmmm. BLTeee-licious. Without turning on the stove or getting popped in the eye with a grease BB...

At just 5" square, I'm sure the GreenPan Mini is a staunch believer that size doesn't matter, it's what you do with what you've got. And when it comes to sizzling up breakfast, lunch, or dinner for one, this nonstick...

#BreathableBacon and the Hormel bacon-scented face mask it refers to are, surprisingly, one of the least surprising hashtags and products of 2020. Honestly, the sexy (and elusive! More on that later.) Hormel Black Label...

Oreos and Twinkies topped with bacon and then dipped in chocolate. This is what I would call the Trick-or-Treating Mother Lode. At least before wackjobs started putting needles and poison into their homemade treats for...