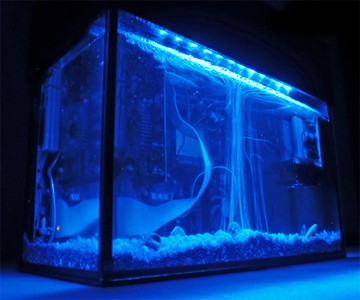 Suck it, fishes! Thanks to AquariusPC, computers no longer have to gaze covetously at aquatic life, seething in envy over the cool, bubbly, pebble-smattered digs they thought they could never own. The Italian company has devised three PC cases that submerge their computers aquarium-style in 11 1/2" of neon-lit liquid sweetness. The blue Miami, green Bali, and fuchsia Marrakech reside in a mixture of pharmaceutical grade mineral oil (liquid paraffin to loyal nail salon patrons) known for its high heat conductivity, absence of electrical conductivity, and low viscosity. The liquid is also odorless and colorless, not flammable, and does not oxidize over time. Which is basically a blah, blah scientific jargon way of saying Yo. It's a fully-functional PC chillin' in a badass glowing aquarium that won't short circuit or electrocute your badass-glowing-aquarium-loving ass.

AquariusPCs have standard PC features, such as USB connectors, a Pentium 4 3.00 GHz processor, and a 250 GB hard disk. While a CD/DVD player is not included, it can be purchased separately and attached via USB. Other specs include:

Aquariums hold 24 liters of liquid mineral magnificence, and are fitted with AirFizz 50 ultra-silent pumps which, along with the neon lighting, can be turned off for computing in utter silence and darkness. Total size of the PC case is 16.7" tall x 7.5" wide x 11.6" deep.

Not geeked out enough on the science and technology behind the SCUBA computers? OK, answers to frequently asked questions: No. Yes. It's one of the great mysteries of the universe. I'd probably just get a 55-gallon barrel of lube instead.

Come on, it was a little bit funny.

Fine. Aquarius PCs reign supreme in computer temperature control because the heat exchange between their oily liquid and outside air, plus the convective motion of the fluid prompted by the system's fans and air pump, dissipate heat even more reliably than standard fan or liquid cooling systems. The mineral oil's few free electrons also enable it to resist current flow, preventing short-circuiting (AquariusPC honchos point out that power plant transformers often use oil as a cooling mechanism for this reason).

AquariusPC parts are fully replaceable, predicated on the use of gloves and non-jackass maneuvers, should owners want to update individual components.

I live for shenanigans of the PC Prankster variety. No, not because I'm devious and mean-spirited, because I have great empathy for others. I know as well as anyone how it feels to reach a level of frustration with a...

CuBox - The Little Computer That Can

It's a straight up cage fight for the title of World's Mini-est Computer. First, we showed you the Raspberry Pi. Then came the Android MK802 Mini PC. Now, measuring in at 2" x 2" x 2"--about the size of an Everlasting...

Moving goldfish out of the living room and into the bathroom for a perfect view of what will surely be their place of final burial, down the toilet, seems like an illogical move. That is, until you see this awesome fish...

This is one of the coolest products we've come across in a long time. These are real damn jellyfish swimming around in your house. This is a very legitimate site and has a solution for all budgets...

Terrarium, aquarium, or herb garden. Grow flowers in the winter, or make a rainforest for your frogs. Read no complex manuals and acquire 0 new skills to learn how to do it. The Biopod is smart enough for the both of...

Sea monkeys anyone? More like tiny shrimps. A bit redundant, but that's what's in there. No diaper changing. No picking up shit with a plastic bag. No feeding. No nothing. These are the best friends money can buy. Buy...

StormFly - PC for Your Wrist

A PC for your wrist. A Cloud bracelet. An unassuming, yet hi-tech piece of jewelry called StormFly. With a much bigger emphasis on the hi-tech than the jewelry part. The StormFly is a self-proclaimed Ludicrous Speed storage...

Once I'd covered fish aquarium bathroom sinks and aquaponic end tables I figured the whole fish-in-your-furniture schtick had run its course. What other piece of home decor could incorporate aquatic life witho