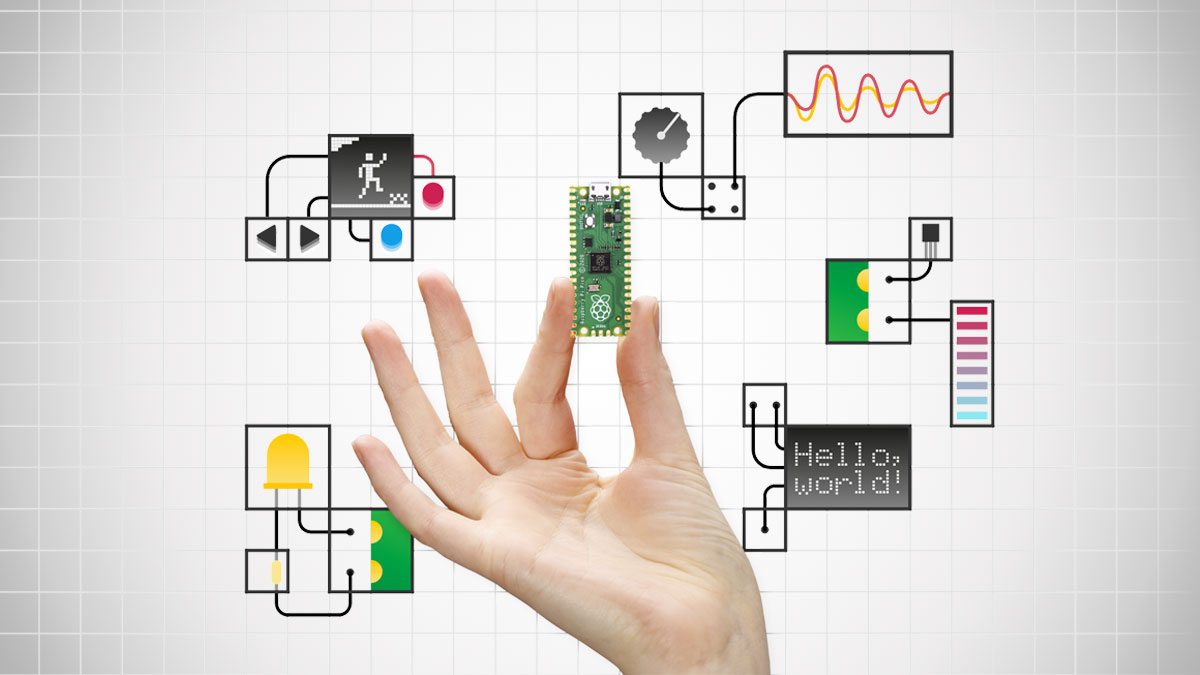 $4
from CanaKit »
Check It Out

Care for another slice of Raspberry Pi? The UK computer and programming hardware foundation has just released the Raspberry Pi Pico, an RP2040 microcontroller chip. Like their other Pi-namite computers and products, the Pi Pico is small and minimalist, designed for both budding and advanced programmers, and costs about as much as a piece of actual raspberry pie to buy.

The Pico's RP2040 microcontroller chip is fast and fiery, with a dual-core Arm Cortex-M0+ processor, 264KB internal RAM, and support for up to 16MB of off-chip Flash. Input / output options I2C, SPI, and Programmable I/O (PIO). With the RP2040 as its backbone, makers can program the Raspberry Pi Pico (in C or MicroPython) to do anything "from controlling appliances to operating a light display."

For beginners, Raspberry Pi has put together a Get Started with MicroPython on Raspberry Pi Pico manual to guide you.

One reason not to get too excited about the SystemSix, a desktop piece that uses a retro Macintosh to display a calendar, the weather forecast, and the phase of the moon, is it doesn't use a real old-school Mac. The case...

The Raspberry Pi sets the bar, and then raises it. Twice. Bar: The Raspberry Pi is a credit-card sized computer that plugs into a TV and keyboard to produce full PC functionality in the form of spreadsheets, word processing...

Thanks be to the skills of Arduino, Raspberry Pi, and Purple Wires for brightening up my day with their working Tetris coffee tables. Purple Wires is the shop with the ingenuity to pair up the other two to create the...

Raspberry Pi has gotten an upgrade. The Raspberry Pi 4 is the R-Pi Foundation's effort to ensure their $35 do-it-all computer will be able to keep up with the requirements of do-it-all in 2019 as well as it did in 2012...

When I read the Flipper Zero described as a "Tamagochi for hackers," I assumed someone had finally found a successful way to teach tech bros EQ. And in a way, maybe the hackerspace-born team of Flipper Zero creators has...

The AnnoyingPCB is a prank for the ages. That is, the age of going back to the office, and the age of WFH, since this endless beep machine hides easily in any room - or car interior - and will drive anyone from co-workers...

The argument for wearing a Watchy wristwatch is paper thin. E-Paper thin. Like its Pebble predecessors, Watchy is an ultra-slim, lightweight timepiece with a simple 200 x 200 monochrome E-Paper display that "delivers...

At about the size of my wife's birth control pack, Adafruit's Circuit Playground Express brings a motherlode of possibility to budding makers, designers, and STEM students interested in electronics and programming...

Though less QuadHands and more QuadPincers, this soldering tool and vise drives home an important point: every now and then we could all use an extra hand pincer. For makers and tinkerers, 4 pincers is even better...