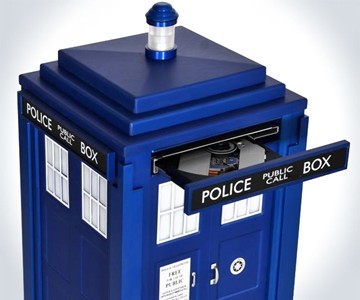 Since the BBC officially licensed the TARDIS PC, Scan Computers was able to build it exactly to scale from the original prop schematics, match the interdimensional police box's precise Pantone color, and load its hard drive with a full Whogabyte of memory to prove it really is bigger on the inside. So get ready to travel the (virtual) world in a sickly accurate version of the Doctor's very own trusty whip.

The TARDIS PC begins as over 45 pieces of high quality aluminum lovingly soldered or stapled or whatever you do to affix lightweight metals together, and imprinted with accurate depictions of the police box's handles and signage. Though the door does not open, TARDIS' inside houses a Gigabyte GA-H61N-USB3, Intel H61 Chipset motherboard with USB3, DVI, and HDMI Support, plus a DVD or Blu-ray drive. Its processor is an Intel Pentium G2120, 3.1GHz Dual Core, with 3MB Cache. Actual hard drive memory weighs in at 500GB, and the computer runs on a Windows 7 Home Premium operating system. So probably you can't use the TARDIS PC to take over the world or hack into and reprogram an army of Daleks to assist you in surviving the end of the world, but...owning one might make you the most geekerific cat in the office and an instant magnet to nerdy hot girls, such as Zooey Deschanel and the one who got knocked up in that movie about teen pregnancy with the guy from Arrested Development.

I live for shenanigans of the PC Prankster variety. No, not because I'm devious and mean-spirited, because I have great empathy for others. I know as well as anyone how it feels to reach a level of frustration with a...

CuBox - The Little Computer That Can

It's a straight up cage fight for the title of World's Mini-est Computer. First, we showed you the Raspberry Pi. Then came the Android MK802 Mini PC. Now, measuring in at 2" x 2" x 2"--about the size of an Everlasting...

StormFly - PC for Your Wrist

A PC for your wrist. A Cloud bracelet. An unassuming, yet hi-tech piece of jewelry called StormFly. With a much bigger emphasis on the hi-tech than the jewelry part. The StormFly is a self-proclaimed Ludicrous Speed storage...

Suck it, fishes! Thanks to AquariusPC, computers no longer have to gaze covetously at aquatic life, seething in envy over the cool, bubbly, pebble-smattered digs they thought they could never own. The Italian company...

But officer, where could I possibly be growing marijuana? As you can see, down here in my mama's basement it's just me, my dirty dishes collection, and my circa 1992 PC. I just finished a particularly exhilarating game...

Yikes, $185 for the TARDIS fridge skin kit. But it's customized to fit your specific cooler's make and model, so at least you know it will look as sick in your own kitchen as it does in the one in the photo. And if any...

This is a man's ring. And by "man" I mean...I have no idea what I mean. I've got respect for the Doctor and his ride and all, but a TARDIS ring the size of the average male's left nut even before you go inside? I think...

Controlling objects through abracadabra gestures seems to be a hot trend right now. So can someone please make me a Mycestro 3D Mouse ring or MYO Armband that, in addition to manipulating my PC, will also abracadabra...