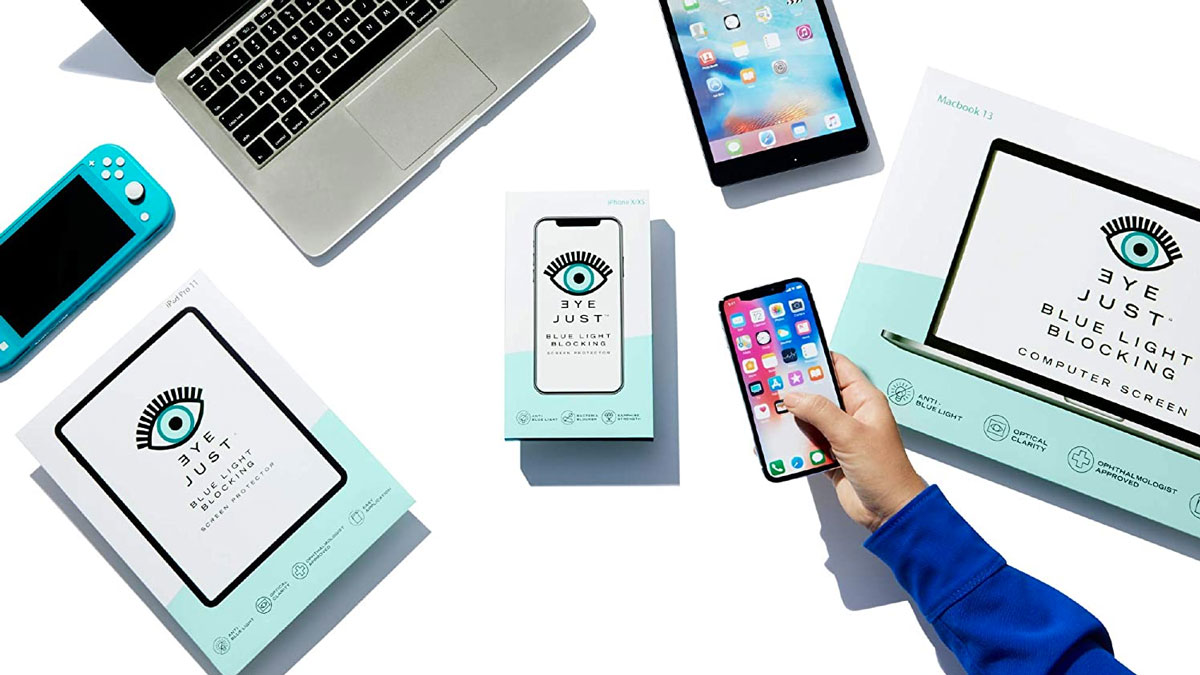 According to EyeJust, who says it's according to facts, we Americans spend around 11 hours a day staring at screens. And those screens emit a blue light that sears into our retinas, causing eye strain and vision damage over time. Now I don't know if that's exactly true, but I do know:

EyeJust Blue Light Blocking Screen Protectors are designed to filter the eye-damaging blue light pouring out from device screens. They're basically the same as gaming glasses for eye fatigue, but you don't have to wear them - handy if you already wear prescription glasses - and they don't have an orange tint, so they won't mess with the colors on your screen.

EyeJust protectors also protect more than your eyes - the stick-on film guards against screen impacts, scratches, and cracks. EyeJust says application is easy and bubble-free, but yeah. I'll believe that when I see it with my own blue-light-blocked eyes.

The Snooperscope is a nifty smartphone or tablet accessory for hunters and fishermen seeking night vision. Athletes seeking to capture their accomplishments in the dark. Ghost hunters seeking validation of their obsession...

They live. IRL Glasses are real-life sunglasses that block ads - that block all screen visuals - in real time. No joke, they're real news created to black out fake news. And screens blasting aggressive backlit pushes...

I read that in honor of Prime Day Amazon is going to be discounting a pair of very highly rated binoculars to less than $120. Oh boy, I sure hope Newcon Optik's LAS 1000 Sniper Detection System is it! These way-more-than-binoculars...

Does your old man like to hunt or fish? Watch live sports? Spy on the neighbors? Well, well, well, have I got a pair of hands-free Binocular Glasses, and a Father's Day gift for you...

These hands-free night vision goggles mean surveillance, after-dark expeditions, and finding the perfect bush to pee on in the middle of the night aren't just possible, they're on like Donkey Kong!...

Sorry, night vision driving glasses won't help you cruise around in the pitch black all stealthy like a Navy SEAL. In fact, these yellow tint lenses aren't meant for predominantly dark conditions at all. They're for reducing...

Initially I thought Lightpack was meant to be some sort of aesthetic enhancement for the media screens of gamers and ravers and I was like, Whatever, if I want to see a rainbow light show from my couch, I'll just get...

Well I know I like that square beam HD flashlight Bushnell makes so I have similarly high hopes for their Equinox Z, a digital night vision monocular with 6x magnification. The after-dark locating and sightseeing device...

On the one hand I hate turning lights on when I have to take a leak in the middle of the night, but on the other hand my mama hates it when I miss the bowl. Or use the bathtub just to be safe. If you're like me, or if...

Watching TV and reading my Kindle from a supine position: check. I like. Lying on my back with my phone propped on my belly and scrolling through Reddit and Twitter first thing in the morning and last thing at night:...

It's a sad day when I see a product like Showerspecs - reading glasses designed specifically for wear in the shower or bathtub, so you can, like, see the difference between your shampoo and conditioner, or notice that...