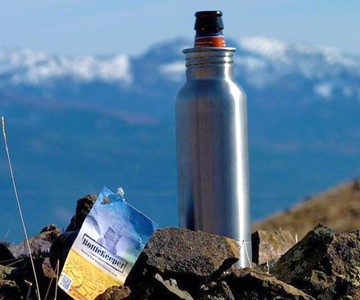 $20
from The Bottle Keeper »
Check It Out

Brewtis the BottleKeeper, and the longneck enthusiasts who invented him, place the why in 2 camps: colder and safer. Brewtis is a full-length stainless steel container with a neoprene sleeve lining its walls that keeps the contents it surrounds cold. Ice cold. Up to 40% colder than a standard beer koozie according to the BottleKeeper guys, who reportedly got their data from science. Additionally, Brewtis' sturdy exterior and screw top protect its glass contents from antagonists such as gravity, misguided feet, and clumsy hands that have been through 2 smartphones and 5 smartphone screens in the past year and probably should not be trusted with any liquid not poured into a sippy cup anyway.

As for the how, it's pretty simple: Brewtis unscrews at its bottom so bottles can slide in neck-first.

Brewtis the BottleKeeper makes a far better companion on hikes and float trips than a girlfriend, as well as a trusty sidekick on hot summer days at the golf course, park, or backyard BBQ. Where he may also prove to be a +1 preferable to a girlfriend.

*Normally, the only reason would be because I'm drunk and someone said, "Hey, dude, I bet you everything in your pockets you can't fit your entire bottle of beer inside that water bottle."

**Normally, the dude above would be correct, and I would lose my $1.13 and trio of Poundtown condoms.

Drink your beer on the down Lolo with this lid of subterfuge. Disguised as a to-go coffee lid, the Lolo* fits over a can of beer, which then slides into most any large paper coffee cup to form a covert koozie. Sneaky...

Keep your drinks as cold as Hoth and as hot as Mustafar with Corkcicle's Star Wars series of insulated tumblers and canteens. Released in honor of the 40th anniversary of Star Wars: The Empire Strikes Back, the collection...

No pipe? No papers? No hose, tube, or apple? If you've got the gnoB Socket water bottle cap you can take a deep sigh of relief...followed immediately by a deep breath in. The gnoB Socket is a sneaky little piece of EDC...

Puffin Drink Wear Koozies make your cans and bottles feel extra cozy in their cozys with a double insulated construction, and miniature outerwear and sleeping bag designs. The latter also put the koozies squarely into...

Beans, beans, the magical fruit / Now they clean and make you toot. The Edamame Bottle Cleaners are a pair of soybeans in shape, size, and color, but abrasive cellulose sponges filled with ceramic weights in composition...

The BevBuckle is business in the front...wait...nah. It's a chunky metal belt buckle with your choice of anything from a longhorn to a largemouth bass on it that flips down to form a perfectly sized, perfectly stable...

Call it a Bottle Royale. The Chugger Jug is a 16-ounce water bottle designed in the likeness of every Fortnite fan's favorite 15-second potable...

Calling The Car Pool the World's Most Portable Toilet for Men doesn't really give you the full picture of this ultra low-tech device. You need, well, a picture to capture the other 994 words The Car Pool is worth. I'm...

It's military-strength protection for your beer this summer! These tactical vest beer koozies, complete with MOLLE attachments for toothpicks, cigs, and lime wedges, might be pretty cheesy, but the cheddar they're oozing...

Rejoice ye liquor-sipping non-smokers who thought the Octopus Pipes we featured last month would be cool, if only you inhaled. Kraken Flasks are here to evoke equal reverence from those who enjoy a fine swig of Scotch...