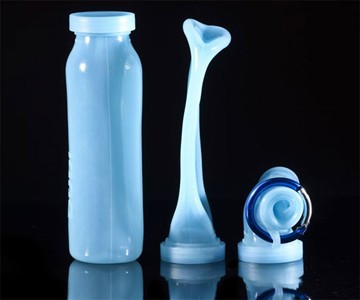 Innumerable points to the Bubi collapsible bottle for calling itself a Bubi and including the option of affixing nipples to its top. Obviously. But in addition to these superficial treats, the Bubi bottle also boasts some practical characteristics that differentiate it from a sea of other BPA-free liquid storage containers. Flexible, scrunchable water bottles exist, sure, but most of them are made out of what feels like a thick stack of Ziploc bags and they don't respond well to being filled with the very substances they are meant to hold. Which is to say that my mama gave me a bag-style water bottle for Christmas one year and about 2 ounces in to adding contents from the faucet the bag stopped inflating and the water shot out of its nozzle and slapped me in the face. I'm so sick of getting slapped in the face!

Bubis, though, are malleable and squishable bottles that do not succumb to sag and deflation. When released from their metal carabiners (one of my favorite words!), the high-grade silicone creations spring to perfectly-formed cylindrical life, ready to take on your favorite beverage. Click on the video above to watch the magic of...whatever force makes the Bubi unfurl so magically...happen.

Bubis accept both hot and cold liquids without compromise. They can also be frozen or microwaved and used as compresses or, furthering that line of creative thinking, called upon to store items such as laundry detergent, medicine, and matches--the latter because the bottles are waterproof and their lids provide a watertight seal. Bubis will even keep safe money and cell phones during water- or sweat-based activities. But the best thing to put in your Bubi? Come on, everyone together:

Bubi collapsible bottles are available in an assortment of colors and 14- and 22-ounce sizes.

A water bottle and mister in one?! Oh, too cool. I mean, O2COOL! Ha! That was deliberate, right? Good one, dads who run the O2COOL brand. I hope the quality of your Mist 'N Sip Misting Water Bottles can live up to the...

TSA-approved! Well...maybe not their contents. But Aged & Ore's Bottle Flight, does pass muster in terms of the 3-ounce capacity of each container included in the boozy travel set.

Inside the Bottle Flight's zippered...

Kinkajou. The word sounds like it applies to a precocious, yet cuddly, mammalian sidekick that sits on your shoulder and surreptitiously swipes peoples' two-bite brownies and tubes of lip gloss during walks through the...

Drip it, pour it, or store it with The Smart Funnel, a multi-functional bottle tool from Cumberland Concepts. For household cleaning and beauty products, condiments and booze, vehicle fluids, or any other liquids you...

As a supplement fiend--I especially like the ones whose claims have not been evaluated or approved by the FDA--I gotta recognize the Umoro One first for concept alone. A sport bottle whose lid doubles as a powder and...

People think I drink only Kool-Aid and sodie pop because I'm immature and unrefined, but really it's because water is such a yawn. I need the excitement and intrigue of carbonation and colors insulting to nature in my...

Pick your poison. Actually, pick two: a spirit to fill one of Orion Oddities's sick hand-sculpted bottles with; and a Lovecraftian beast to guard its contents. The Italian design shop molds the likenesses of Cthulhu and...

The BevBuckle is business in the front...wait...nah. It's a chunky metal belt buckle with your choice of anything from a longhorn to a largemouth bass on it that flips down to form a perfectly sized, perfectly stable...

Grim Workshop has struck gold plastic! The functional tool brand's new plastic rope bottle makers, the Cordage Card, Cordage Tag, and Cordage Micro Tool, look as fun to use as they do functional in use, and as burly as...

What is this, a smartphone for my smartphone? No? You mean I'm supposed to hold this Jelly, this...this...thing that's no bigger than a pack of peanut butter crackers, in my own giant manhands, and use it to talk and...