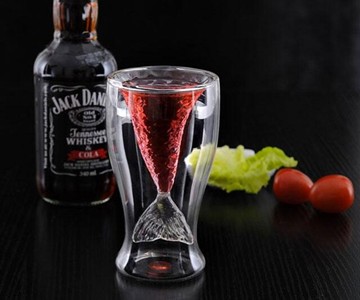 I remember the first time I saw Daryl Hannah walking naked around the Statue of Liberty in Splash. I thought I would have an erection for the rest of my life. But then later in the movie, when she's mermaided out in the bathtub and you see her tail up close, I became utterly repulsed. It was heinous. All scaley and slimy and...obviously missing anatomical parts vital to a woman's appeal. I wonder if Tom Hanks realized when he went to live with her in the ocean at the end that he would never get laid again. Probably not. Sucker.

So now that we've covered how disagreeable mermaid tails are, who wants to sip a Jack & Coke out of one? I can at least assure you that this mermaid is made from heat-resistant borosilicate glass, not fish flesh and guts. The glasses hold 100 mL, or about 3.4 ounces of liquid, which is about 2 shots, which is a strange volume, but whatever. I think we've adequately established that mermaids are weird. Glasses sell singly or in sets of 2 and 5.

The German-made Shtox glass, a Red Dot Design Award winner with a bottom primed for rotational movement, has the patented capability of spinning into infinity at the flick of a wrist. Just like Euler's Disk. Also like...

We've seen levitation around here before. A lot. In speakers. In lamps. In freakin' bonsai trees. But the Levitating CUP still make

Crazy Aaron says his Liquid Glass Thinking Putty is "so clear you'll think the can is empty." Well thanks for the warning, Crazy A, because I'm tired of spending the money I work so hard to earn from my mama's allowance...

WindshieldWOW! - Clean Both Sides at Once

A WindshieldWOW! and its magnetic design that makes it possible to clean both the outside and the inside of your car's windshield at once wouldn't do much for me, as I tend not to clean the outside or inside of any part...

By what magnitude would the awesomeness of mud wrestling increase if all the ladies participating got to wear a Finfolk Productions 100% dragonskin and platinum cure silicone mermaid tail? Muddy, slippery, rolling on...

While they don't boast the superhero aesthetic of Darkfin Gloves--more like the hand-got-tangled-up-in-a-jellyfish aesthetic--these Silicone Swimming Fingers consume a lot less room both in your bag and on your body than...

Adopting its name from Mayan lore, the Doomed Skull Shot Glass is here to help you ring in the apocalypse. It won't ward off zombies or cataclysmic solar flares or anthrax-laced rain drops, but it will get you so wasted...

If any lady wearing this Ariel bikini wants to be part of our world, I think I speak for most dudes when I say, Come on in! The seashell swim top and sexily-scaled mermaid bottoms are instantly recognizable as nods to...

It seems that until the rest of us figure out how to consistently conquer and defy gravity like David Blaine, floating objects will enjoy a comfortable niche in the market of cool crap. Floating mugs, <a href="https: