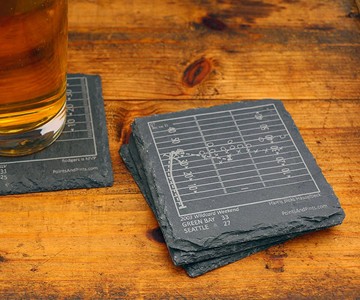 These football plays will go down in history as their NFL teams' greatest, and the slate coasters they're printed on will go down on your table as a barrier between your fine oak and your sweaty can of Bud. The 4-deep coaster sets are team-specific, each laster-etched with a different moment from a past game that sent fans out of their gourd in ecstasy.

The coasters also include player movements through the play, plus the game date, final score, and relevant play details.

NFL team play coasters have felt backing their slate so they won't be just as likely to ruin your furniture as they are to protect it. Choose from 13 of the league's teams, including San Francisco, Denver, Green Bay, Pittsburgh, New England, Chicago, and Seattle.

If none of those available are your favorite, I would suggest buying a pack of nemesis coasters just to smash in anger when your team is playing them, but the best football plays in the land don't come cheap, so I'm not sure it would be worth it. Better to bookmark the coasters as a gift for a man whose football gods are amongst those offered. And if it's the Patriots, be sure to wrap them up alongside A Gronking to Remember

I definitely wanted a set of MechaniCoasters to appease my fidgety fingers and steampunk penchant, and my wife's naggy inclinations and aversion to anything ring-shaped and wet touching her tables. But then I saw these...

The Scaredy Cat Hot Pot Trivet is arched and ready to pounce! Prepare to have your face clawed off! ... Unless you quick grab that dutch oven full of chili and squash the Scaredy Cat in place...

This granite coaster set for chilling whiskey looks like it took slabs of the rock, cut out their centers, and went the donut hole route, turning those pieces into little stone ice cubes. So what you'll get is a complete...

We've all done it. We've all badgered someone else for doing it. And really, song lyrics misheard, mistaken, and butchered are almost always more fun than what the artists are actually singing anyway...