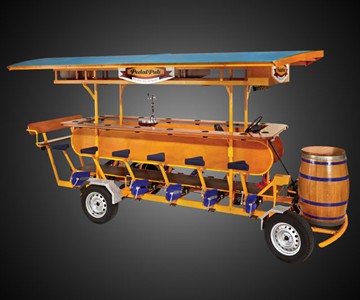 $40k
from Hammacher Schlemmer »
Check It Out

One time I participated in a Pedal Pub Crawl. Yeah, I know the beer bar on training wheels looks more suitable for middle-aged tourists who own a designated pair of "walking shoes" than a strapping stud like me, but I do admire its seeming ethos of: calories in, calories out. So in a rare display of being a good sport--and common practice of taking every opportunity to show off the beastly strength of my legs--I hopped on the Pedal Pub for an afternoon of pushing away and pounding down in honor of my friend Cornelius' acceptance into some graduate painting program that is never going to equip him with marketable skills, but will probably expose him to the best strains of marijuana on earth.

Implications of drinking and driving and open container laws aside, riding/powering the Pedal Pub is pretty alright. It holds 10 pedalers, 1 steerer, 5 additional freeloaders on a back bench, 1 bartender in the midst of it all, and a quaint-looking wooden cask for holding the keg of Miller High Life. The keg connects to a tap and overflow tray at the bar, the latter of which secures poured brews with its built-in cup holders. A sound system with four speakers in the bar's overhead storage racks is also included for playing an integrated AM/FM radio or adding MP3 connectivity. Pedal Pubs support riders up to 300lbs each. Eh, I could comment on that, but I'm gonna give the fatties a break today.

So after Cornelius' Pedal Pub Crawl we went to one of his art shows. This one was also a fundraiser for snow leopards so all of the art was snow leopard themed. Most of it was just photos or mediocre portraits of snow leopards, but this one extraordinarily F'd up painting was of a girl sitting at a table with a plate of spaghetti, puking up the spaghetti. Except the spaghetti wasn't noodles, it was snow leopards. She was puking up snow leopards. And the title of the piece was "Shouldn't Have Eaten So Many Snow Leopards." I was thinking of buying it to hang on the wall whenever I get tired of a girl and want to break up with her. You know, have her walk in one day, see a new addition to my living room that happens to be a chick gorging on and then hurling back up snow leopards, and then suddenly she decides herself that we shouldn't see each other anymore. But I didn't because it would have cost me $75 and a trip to the ATM.

Dometic MoBar. It's short for Domestic Mother's Bar, but they changed the name so dads and dudes will want to use it. No, that's not it. OK, they changed it so it wouldn't be so obvious how bad domestic mothers need a...

Are normal home brewing kits typically boring and ugly? I don't really know, as I focus more on drinking beer than making beer (best to funnel all of your energy into a single channel and dominate it!) but whatever normal...