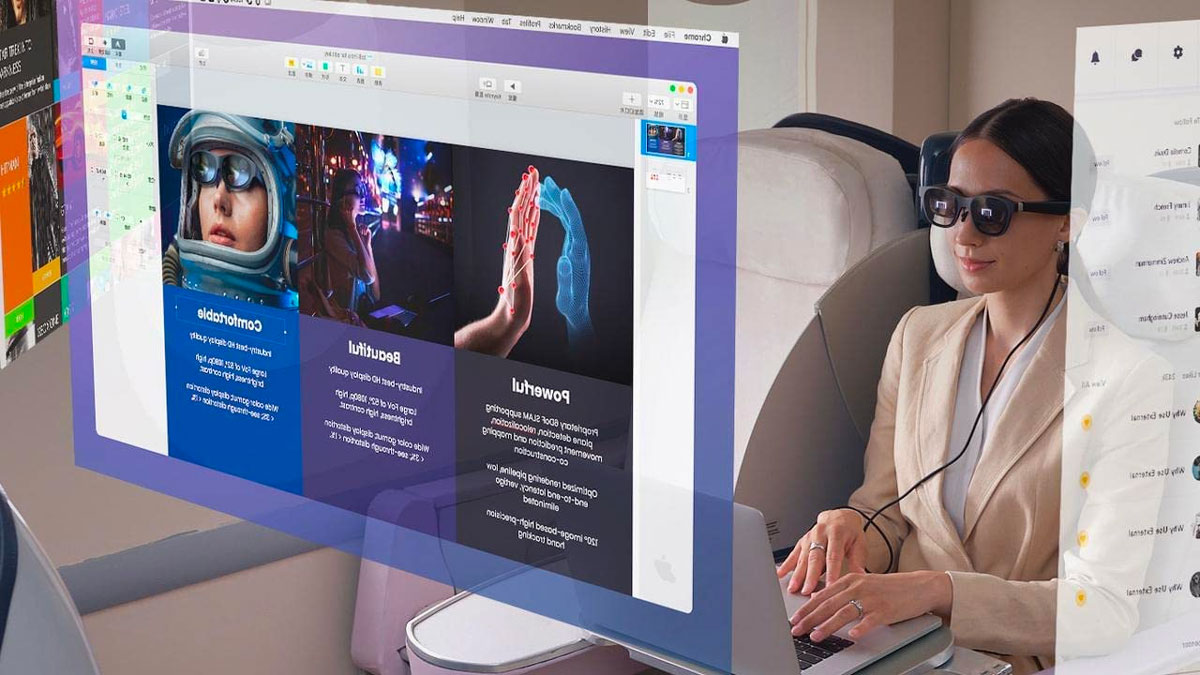 No, wait, that's a dark path to travel down, and truly not where I want to lead you in discussing NReal Air AR Glasses, which are actually all about the light. Light in the form of technicolor, cinema-grade viewing experiences with their 130" Full HD display in Air Casting Mode, or 201" Full HD display and real world augmentations in Air AR Space mode.

NReal's 79-gram sunglasses-style frames house AR tech that can enhance a lot of the tech you already use daily. Air Casting supports streaming, cloud gaming, TikTok, pretty much all mobile apps on a variety of platforms, including Android, iPhone, Steam Deck, and Nintendo Switch*. AR Space (compatible only with Android devices) combines 3DoF with first and third party AR apps to provide NReal Air wearers enhanced options for everything from web browsing to stationary cycling, to AR-exploring the world.

*The NReal Adapter, sold separately, is required to use NReal Air AR Glasses with iPhone and Nintendo Switch.

Proto's forthcoming M is a tabletop holographic communication / media device and, in my opinion, the newest best way to have dinner with your in-laws. Look at how happy that mom and baby look talking to Hologramma on...

One thing I suck at is running. So the Ghost Pacer, a mixed reality headset that projects a holographic workout partner to pace, challenge, motivate, and improve your running game, would seem pretty damn cool to me if...

If fitness instructors with boundless energy and endless inspirational sound bites, or filmed rides through the French countryside and Swiss Alps aren't enough to get you on a stationary bike, Playpulse is hoping immersive...

I thought for sure Bose Frames, the sound mack's new audio sunglasses, would be bone conduction shades, but nope. Bose has something else up their sleeve to shove down our canals: open-ear audio courtesy of miniaturized...

Magic Leap is beginning to roll out its Creator Edition of the Magic Leap One mixed reality headset. At printing, developers and artists interested in taking one of the first Magic Leaps of faith into this mashup of real...

Yuichiro Katsumoto created the Bottomless Joystick - still in concept / prototype phases - as a way for users to leave the ground during VR games and simulations. "The ground" in this case would be the joystick's trademark...

MekaMon's Berserker V2 AR Battle-Bot isn't quite as cool as, say, an Mk. III MegaBot, but in its own, scaled-down way, it's still a piloted battle mech whose potential for AR combat makes it look almost as fun for me...