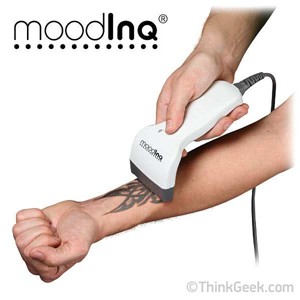 NOTE: To everyone who keeps emailing us to reveal "the truth" about this product, please conserve your time and effort; trust us, we are well aware of the month and day on which ThinkGeek released their groundbreaking tattoo technology.

There's no arguing it: cool tattoos are cool. But some of us aren't ready to let another human being repeatedly pierce our flesh with a needle and permanently inject it with ink when we aren't 100% sure we're going to be as passionate about zombie bunnies 20 years from now as we are today. This is where the moodINQ Tattoo System finds its niche.

MoodINQ gives those who are certain they want a tattoo, but are waffling on the "of what" part, the opportunity to get inked with one design, and then magically change it to another as the urge arises. So what begins as a skull & crossbones can instantly shift to a tribal sign with the wave of moodINQ's special wand over its surgically implanted E ink canvas.

More specifically, moodINQ jives as follows: the good people at Think Geek partnered with leading physicians and technicians in the cosmetic surgery industry to derive and implant an E-ink grid, or canvas. Canvases are primed for anywhere on the human exterior, and are appropriately sized and shaped to the body part implantees would like to ink. After a short healing period (usually 2 to 3 days), the newly tattooed can begin using their included moodINQ software to turn epidermal canvases into a sort of digital picture frame, rotating from one striking image to the next.

I'm afraid online ordering options for the cyborg flesh treatment have yet to make it to Amazon. In fact, should you want an anatomical anomaly tattoo so whiplash-inducingly realistic and infatuating it gets mistaken...

Oh the changing whims of beauty! Seems like just yesterday everyone was buying makeup to hide their freckles, and now we have Freckle Pens made specifically to help dot on fake ones. Ladies, I don't know how you keep...

I wanted my girlfriend to dress up as the hot chick from Blindspot for Halloween so I could test out these Momentary Ink custom tattoos on her, but she was all, No! Absolutely not! I have a trial starting Thursday and...

It only took 10 years, but the Prinker temporary tattoo printer is finally here to give a nod to MoodINQ, one of ThinkGeek's most clever and classic April Fool's jokes...

Want to make your tattoos come to life without eating hallucinogenic fungi? Then trade the magic mushrooms for some Magic Tatts, temporary tattoos that interact with an accompanying iOS/Android app to create animated...

This baby with a mohawk and sleeves tattooed on his arms looks ridiculous. Even though the mohawk is probably just a styling of the only hair he has on his head and the sleeves are part of a onesie. The poor bastard...

I can't tell if these temporary tattoos are attractive or look like someone taped a doily to your eye, but I think girls will like them, so as a nod to girls, I'm going to award Man Nga Liu's makeup alternatives relatively...

I wonder if women who see these Tattoo Tights feel like I do when I see the Wonderffle Stuffed Waffle Iron. All hot and sweaty and in need of a change of pants...

Hey, it's not like I'm a puss, it's just that there are certain things in life I don't care for. Pain being one of them. Hush anesthetic gel has some mixed reviews about its effectiveness in creating a joyous barrier...

Jolly Rogers, Hearts that say "Mom", Tweety Birds, sure they're gumball machine classics when it comes to temporary tattoos, but what about getting tatted out for 2 to 3 days in a design that expresses true individuality...