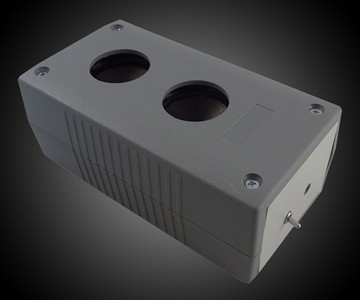 File it under "Prank." "Leg Up." "TCB." Or "Revenge." Shomer-Tec's Sonic Assault Electronic Disruption Device looks like no more than a nondescript gray box--a useless one, perhaps. You can even flip its switch and nothing will appear to happen.

When activated, this simple box emits a frequency powerful enough to make anyone who hears it feel unsettled, uncomfortable, unfocused, and unwanting to come 'round these parts no more. In other (Shomer-Tec's) words, the Sonic Assault Electronic Disruption Device is a "highly effective government-grade Sonic Nausea device."

One Sonic Assault application is dispersing a riled up crowd, loiterers, or a group of punk kids hogging the Street Fighter II arcade at your favorite Chicago-style pizza joint. Equally interesting, you can flick it on near someone giving a speech or monologue in acting class (this swell dating story gave me that idea) to F with their concentration and make them squirm. Shomer-Tec notes the device has also been proven to debilitate audio capturing devices, such as microphones, since its frequency masks surrounding noise. The company says presidential candidates past and present have used these products to curtail prying ears and media rats during private speech events.

In addition to its sexy gray lines and angles the Sonic Assault Electronic Disruption Device has an on / off switch and LED status indicator. Shomer-Tec says their current version outputs triple the sound pressure levels of the previous model, and boasts more directionality and increased projection.

Muchas danke to Shilpa S. for the Dude Product Tip.

Now here's something that should be illegal, but is instead available with free shipping on Amazon. The reverse peephole viewer, used appropriately by law enforcement personnel and inappropriately by 99% of all others...

The Killer Key is for law enforcement officials, landlords with squatters or evicted tenants, and pranksters who thrive on taking things one step too far. See, the key blade inserts into any Kwikset or Schlage brand lock...

The Bond Next Door: Top 11 Tools for the Everyday Spy

RC surveillance mosquitos and robotic hummingbirds as security cameras may not be perfect tech yet, but they're on the rise and constantly improving, with some available to commercial markets for testing. And even looking...

The Assassin's is a trick teapot! And not a very fun trick if you're on the receiving end. The Chinese creation contains 2 separate interior compartments, one of which was historically meant for tea, and the other of...

Not that I'm one to break and enter, but...I could be if I had ITS Tactical's Titanium Entry Card. Made of aircraft grade titanium, the 0.032" thick "emergency" lock pick tool set fits just as easily into wallets as it...

Drone Defence says the Paladyne E1000MP is a drone jammer, part of a series of portable "electronic countermeasures" designed to jack up the command, video, and navigation signals of IIIFOs. Identified, intrusive, and...

Shomer-Tec's Titanium Escape Ring won't just serve as a symbol of your love for and commitment to your wife, it will also get you out of the handcuffs that chick from the hotel bar leaves you in after she Roofies you...

Rift Recon terms themselves Physical Security Specialists. They explain what that is in about 500 words of fancy and circumlocutory jargon, the essence of which I'm pretty sure means they cater to high-class Shady McShadersons...