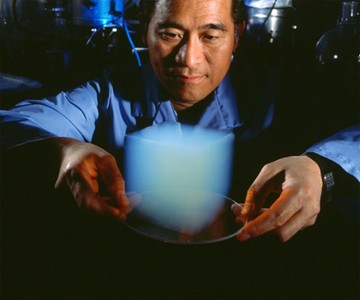 Not only is aerogel the world's lightest solid with a composition of 99.8% air (carbon dioxide) and 0.2% silica gel, and not only does it have sick nicknames, such as "frozen smoke" and "blue smoke", but it also has the capability to withstand a direct blast of 1 KG of motherfucking dynamite and shield precious objects, including delicate flowers and my wiener, from a blowtorch blasting more than 1,300 degrees C. (Not recommended: testing out that last assertion at home, unless you're extremely skilled or in the market to become a woman.)

Aerogel was developed by NASA for use in insulating the Mars Rover, proving once again why "rocket scientist" is the standard profession tossed out to establish someone's intelligence, or lack thereof. The silica compound can support over 1,000 times its own weight--by way of comparison, a 2 gram chunk can hold up to a 2-1/2 kg brick--and its makeup of millions of pores and ridges indicate that if 1 cubic centimeter of aerogel were unraveled, it would cover an entire football field. Kind of like my vomit every time I see Ben Roethlisberger. Future aerogel applications may include ultra-light tennis rackets and super-insulated spacesuits for a manned mission to Mars, or the trip my ex suggested I take back home to hell.

A novel collector's item, and really nothing more in the 1" x 1/2" x 1/2" dimensions sold on Amazon, Aerogel ships in a small acrylic box, and arrives with information on handling.

Fred's Chill Out Googly Eyes Eye Mask soothes your swollen and weary sockets, and provides an escape from the world...without letting the world think for one second that you've taken your eyes off of it. Because you haven't...

The Haxon AirFan mounts over your bed to create airflow and cool you off at night, yes, but the smart piece of tech also comes with 19 other built-in functions and features to help improve your quality of sleep. Plus...

Chaos is an area of mathematics that studies complex systems and the mind-blowing effects seemingly small, inconsequential changes can have on them. Dr. Ian Malcolm used one example of the Chaos in action, the Butterfly...

I love the dude who makes Grand Illusions' videos. I think his name is either George or Hendrik. Both because George Auckland and Hendrik Ball are the two Brits who founded and run Grand Illusions out of an 18th century...

I'd call the Tungsten Sphere a desktop toy, but given its high density - at just about 2" in diameter the sphere weighs over 3 pounds - I'm not sure how much fiddling or stress-relieving palm rolls you'll be able to do...

It's 2.2 pounds--or what the rest of the world calls 1 kilogram--of tactile stimulation and scientific wonderment. While all sand can technically enjoy kinetic activities, Kinetic Sand claims the additional bragging rights...

Gifts for People Who Don't Think We Landed on the Moon

I was surprised to hear Steph Curry isn't the first person to think we never landed on the moon. That there have actually been many a conspiracist thoughtful skeptic who claims, and has endeavored to prove over the past...

Crazy Aaron says his Liquid Glass Thinking Putty is "so clear you'll think the can is empty." Well thanks for the warning, Crazy A, because I'm tired of spending the money I work so hard to earn from my mama's allowance...

The Vortex Dome is a science-packed desk toy that does for you eyes what fidget toys do for your hands. With a stainless steel and ball bearing spinning base, the Vortex Dome gets a little tactile stimulation in there...