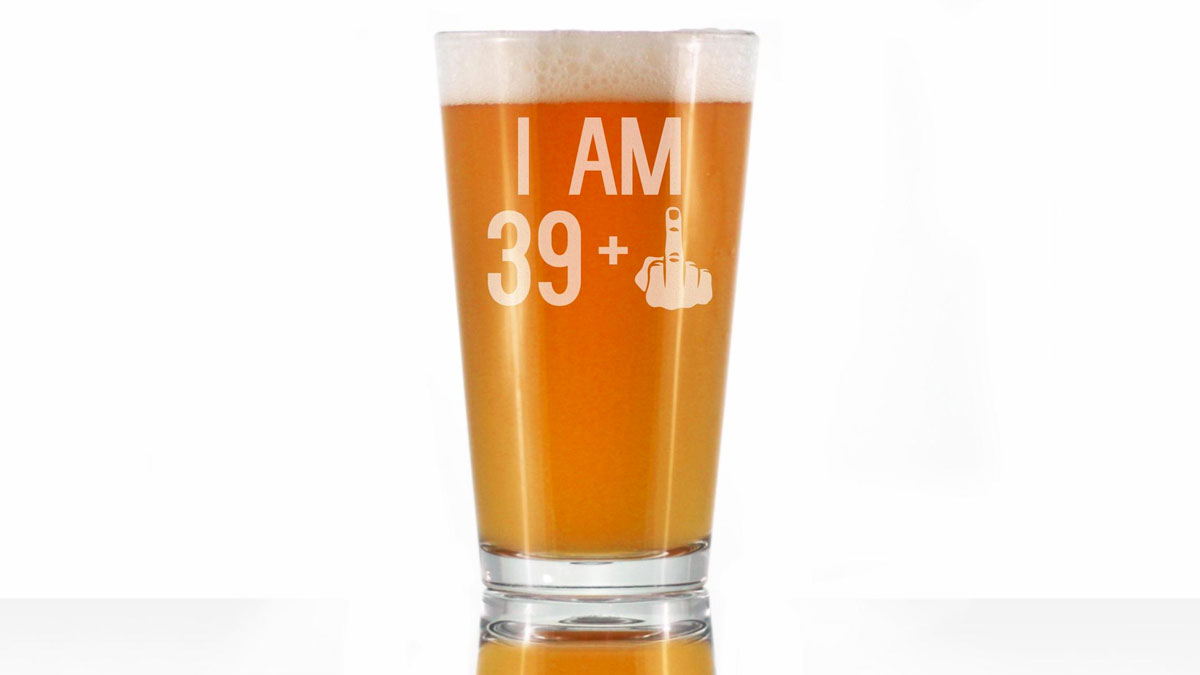 I bought one of these middle finger birthday glasses for my father-in-law, who turns 80 - haha, 80, the crusty old fart! - this year. I went with the "I'm 79 + [flipped bird standing in for the number '1']" rocks glass because the part of his crustiness that really shines, i.e., the part that openly opines on my life decisions and worthiness of his daughter, comes out with his bottles of Scotch. But middle finger birthday glass etcher, Bevvee Co., will also be able to make me one in wine glass form for when my mother-in-law joins him in a few years.

Those who need an appropriate milestone birthday gift for beer lovers can also +1 with the middle finger on traditional pint glasses and beer can pint glasses.

Bevvee Co. has a lot of magical birthdays spread across all the different types of glassware they offer included as standard store listings, but will also gladly fill a custom order if you have a number + finger, or number + finger / glassware combo, not shown. Since I happen to have several photos of my father-in-law flipping me off, I was tempted to ask if I could get his actual finger custom-etched on the birthday glass I ordered, but ultimately decided I don't want him to think I care that much.

Well, $10 million is the price for the super deluxe, diamond-encrusted model of The Human Regenerator. Bargain hunters who are OK with regenerating unsound cells, strengthening their immune systems, and enhancing skin...

When you see these Virgin Bust Breast Lift Pads do you think the same thing I do? Tune in, Tokyo. Tune in, Tokyo. No? Maybe just because you don't have all the information on the boobie-bettering cones yet. They fulfill...

The manufacturer calls these Abusive Birthday Balloons a "conversation starter." Ha! I'll say. A conversation about what a jerk whoever threw this birthday party is...

1960s pictures, 2010s nuggets of wisdom. The London-based Laybirds launched in 1964 as a series of hardback books presenting stereotypes of Brits and their family life. They were intended to help kids learn to read. And...

Cake Pops, you're out. Cake Push Pops...Get! In! Mah! Belly! I'm not even a rainbows 'n' sprinkles kind of dude, but these stacked, spongy Roy G Biv treats from Flour Shop are making me all Veruca Salt levels of covetous...

The Best Prank Birthday Card Ever

Now my favorite birthday gifts come in the form of a Peeping Creeper at the bedroom window or talking an amateur heavyweight UFC fighter into accusing my friend Cornelius of sleeping with his girlfriend, but if you're...

The Giant Oreo Cookie Cake Mold is even pink. So there's pretty much no question I should give it to my wife, She-Ra: Princess of Power, as a Valentine's Day gift. And then invite her to use it to bake me a Giant Oreo...

Set the tone for your super party with some super invitations. No envelope needed! When you open the bat covered flaps the invitation is inside. Constructed from high quality cardstock, the invitations are quite sturdy...

Unique Gifts for $50 or Less

Before putting together a list of unique gifts for $50 or less, I spent some time thinking about what the dollar-or-less number should be. How much do people spend on gifts, and on individual gifts, these days? I feel...

Hey, look at that. Dick and Titsy are about to pop up out of their...greeting cards? In what is surely the best use of the term since the days of *NSYNC, Dirty Pop has beat off and busted out a set of penis and boobies...