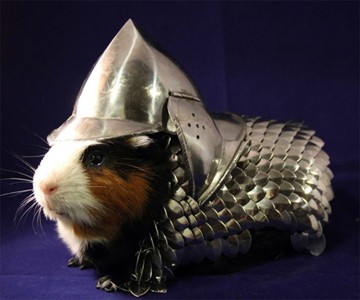 I had a guinea pig as a young boy. I named him Ruffles because he and I both were somewhat effeminate. They didn't make polished steel scale outfits for guinea pigs back then. And I have to admit, taking in this majestic handmade rodent armor, and considering what Ruffles could have had brings a salty tear to my eye and a pang of melancholy to my heart.

But maybe the scale-mail suit will better serve the ones who don it in these more precarious, apocalyptic times we face now. I'm pretty sure the guinea pigs are due for an uprising. My sense is that they're going to band together to overturn the Pug population, and if my sense is correct, they're going to need some protective armor to shield them from perpetual projectile showers of snot and the dogs' attempts to hump them.

Up for auction on Ebay through June 21, 2013, sale of the handmade guinea pig scale-mail armor will benefit the Metropolitan Guinea Pig Rescue of Virginia. Yes, that's correct. Just when you thought "handmade guinea pig scale-mail armor" was the weirdest thing you would read all week, I told you the State of Virginia has its own guinea pig rescue group. Pssst, guys, maybe if you just gave them all a set of the armor, they wouldn't need rescuing.

Guinea pig body armor is made from polished steel scales and steel rings, woven together in a process that took several weeks. The matching helmet was a Renaissance Faire purchase, but is also included in the set.

A gauntlet of thanks to Mitch T. for using Dude Product Tips to apprise me of this medieval household pet awesomeness.

*Less than a week later, the auction concluded, with the winner doling out $24,300 to protect his pig.

JP Rishea of Bionic Concepts has created a bit of a name for himself in the cyber/steampunk gadgetry world. From his exo-gauntlet to his gas-powered LED wings, Rishea's designs always emerge as strangely tas

Buckle up, boys, it's October 1. The onslaught of sexy Halloween costumes is revving its 400-asspower engine. Segue into the spectacle with a looksee at Spanish designer Boyd Baten's cyber armor. No, wait, I mean Boyd...

Get a FORTIS exoskeleton and you'll instantly have: 1) superhero strength; and 2) a superhero costume. Two birds, one stone. Like Iron Man. Lockheed Martin is developing this unpowered, lightweight external structure...

You know, I've been thinking it's getting to be about time I move out of my mama's house...

See, chivalry isn't dead. It's just been co-opted by the hoodie-wearing hipster crowd. This Medieval Knight Hoodie drips of irony akin to permutations of the mustache, and trending fads akin to bacon two years ago. Thanks...

Full Body Armors' superhero and video game character costume replicas will secure your cosplay convention credibility, and make all of your Sundays Fundays. The made-to-measure suits transform wearers, from head to toe...

Medieval knight helmets. That's what hip nanas who know what it means to give their grandsons street cred crochet. Now I don't know if Dee Forrest is a grandma, but she's definitely privy to what the cool kids these days...