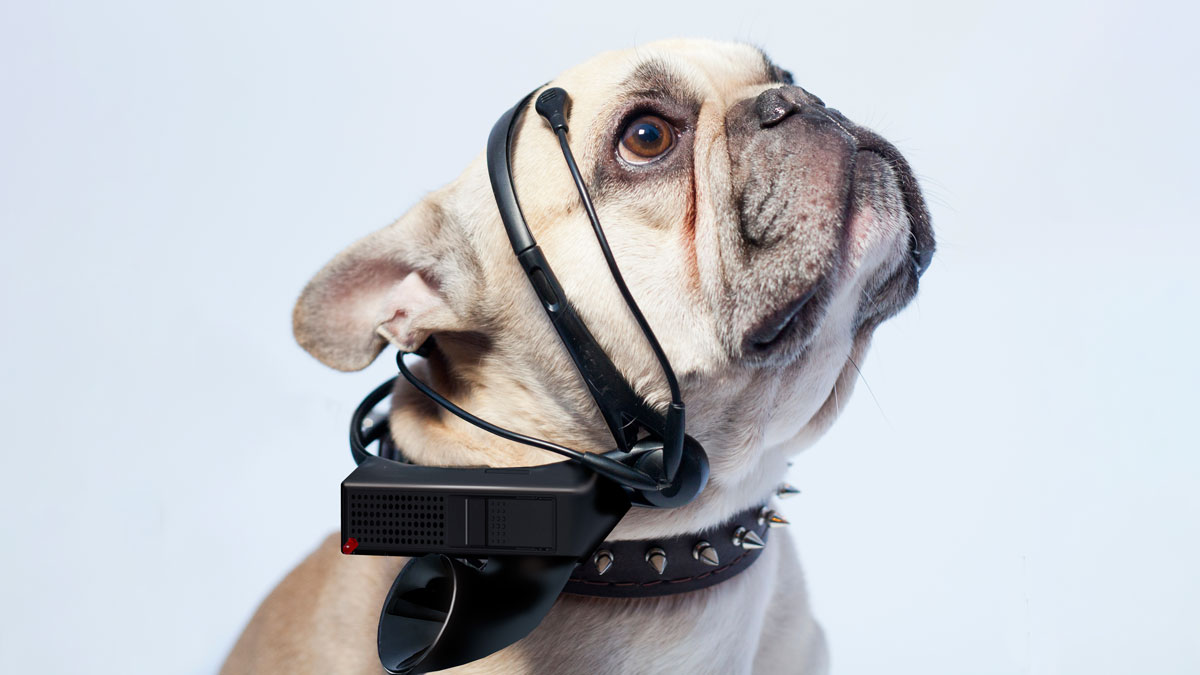 From the Nordic Society of Invention and Discovery - yes, that's a real society, not one made up by Wes Anderson - comes No More Woof, a device that lifts up the latest technology in micro computing and EEG, and plops it down onto the heads of dogs, so as to translate their barks, groans, and sighs into plain English*. And why wouldn't it? I say it's far time people who dress their dogs up in corduroy pants and pink dresses and kiss them on the mouth have the opportunity to hear in a language they understand that the object of their affection needs to take a piss or would like the clothing adjusted so that it can lick its crotch.

How No More Woof Works

Using No More Woof entails--Buddy is going to love this--fitting the dog with a headset contraption that includes sensors, processors, and a loudspeaker for broadcasting its emotions, desires, and comments about the weather. NSID freely admits that their Dog-to-Human translator is a work in progress, still in research stages, and will almost certainly undergo additional changes, even if their Indiegogo crowdfunding goal is reached, and the current model ships out to backers. At this point, they feel they have identified EEG patterns indicating 2 to 3 distinct canine thought patterns: "I'm tired," "I'm hungry," and, when a dog sees a new face, "Who are you?"

That's right. You'll finally have an alternative to relying on your dog's begging, refusal to move from a reclined position, and leg humping to determine when he's hungry, tired, or just met someone new!

The Science Behind No More Woof

In describing their technology and its legitimacy, NSID discusses the combination of EEG-sensoring, Micro Computing and BCI software. EEG patterns are present in all mammals--they're essentially the swarm of electrical signals that transport thoughts--though their structure differs between species. Since animal brains are less complex than human brains, their EEG signal patterns tend to be more obvious when it comes to feelings of anger, fatigue, and curiosity. No More Woof hopes to capitalize on this simplicity, while perfecting the supporting tech, and overcoming challenges of signal sensor placement for optimal EEG detection (i.e., reading through fur.)

Post-EEG reading pickup, a BCI (brain-computer interface) processing unit must then be able to analyze and translate the dog's brainwaves into comprehensible thoughts. No More Woof is using a Raspberry Pi within the headset to accomplish this.

If you're a pet lover--or need to get a gift for one--and don't feel forcing your dog wear a telemarketer's headset with diodes that scan its brain activity is any worse than dressing him up like a velociraptor on the weekends, pledge your support for No More Woof on Indiegogo through February 14, 2014. Backing options include the No More Woof Micro, fitted with 1 sensor and able to announce 2 to 3 thought patterns, or the No More Woof Standard, fitted with 2 sensors and able to distinguish 4+ thought patterns.

December 28, 2013 Update: Popular Science, plus some professors of brain-related disciplines at various illustrious universities that I did not attend, have heralded NSID's No More Woof as...bogus. Verbatim. The name of the article is "This Dog Thought-To-Speech Translator Is Bogus". But you knew that already, right?

*NSID is working on Spanish, French, and Mandarin.

"Just text us when you're here. No need to knock and get the dogs involved." Whether you're a pet owner or not, this doormat sends a relatable message. And since anyone who comes over is certainly on their phone right...

Of all the portable pup water bowls I've seen, the AutoDogMug might be the most user-friendly for both dog and owner. Highwave's leak-free hound hydration system is essentially a squeeze bottle with a small bowl on top...

iFetch isn't the first automatic ball launcher for dogs, but it's about half the cost of the Go Dog Go, and I am more partial to iFetch's video of the dancing Boston Terrier than I am to Go Dog Go's of the spastic Puggle...

Clawgs - Dog Shoes That Allow Dogs to Use Their Claws

Clawgs, dog shoes - or rather dog sandals - don't surprise me in the least. For years now dog owners have thrived on making their pets look ridiculous under the guise of comfort and protection. Who remembers the Shed...

Ashleigh Davies designed the Doze, a combo dog bed and side table (with removable lap desk!) in response to the prompt to create "a multifunctional piece of furniture to help reduce stress for dogs with separation anxiety...