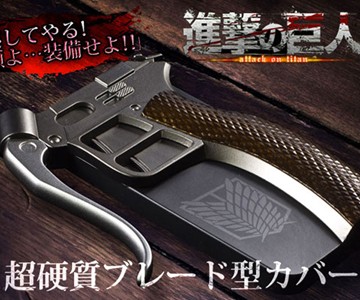 It's always interesting when and which Japanese manga and anime cross over into mainstream Western culture. Here it's even more interesting that a piece of Japanese manga/anime has crossed over into real life. And even if you don't know WTF Attack on Titan is, this iPhone case's design might be swell enough to transcend any necessary context. Uh, just be careful where you flash the pistol grip-looking end of it.

A re-imagination of one of the weapons used in the human heroes vs. gargantuan, blood-hungry humanoids series, the Attack on Titan Super Hard Blade case latches cooly onto an iPhone 5/5S. Though it's missing the detachable sword/money end of the weapon--and vendor Strapya World reminds us repeatedly that a super hard blade cannot be installed--the blade hilt still makes for an incomparable phone holster.

You can pull the case's lever to open your phone's camera cover, though use of the iPhone camera flash is not possible with the case in place. It also needs to be removed for phone charging on a cradle. Attack on Titan Super Hard Blade cases do maintain access to power and volume buttons, plus connector and earphone jacks. And again, you cannot install the super hard blade. For visual learners, there is also an illustration of this sad reality in the photo series above.

I don't know how to shoot a gun, or really even how to hold a gun without soiling my pants, but I bet if someone put one gun in my hands and another to my head and demanded I use the former to fire at a watermelon dangling...

F-Cup Cookies sound like they would be a joke, and they probably are, but for all women with concave chesticular regions and, more importantly, for all the men who have to fondle them, I sure as 2 seconds of motorboating...

Goblin Paintball agrees with Arsenal Firearms: Why get a pistol with one barrel when you can get one with two. In Goblin's case, the double barrel pistol is the Deuce, an air cartridge issue that can launch a terrible...

Cabot Guns has forged a few big bangs into its Big Bang Pistol set. The matched left and right pair of 1911s aren't just two of a kind, the only two Cabot has and will ever build (bang!), they're two of a kind made entirely...