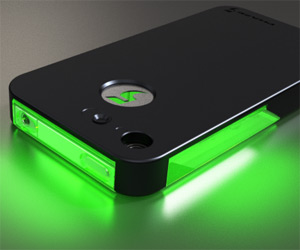 FLASHr debuts on Kickstarter as New Orleans boys Trey DeArk and Terence Green's slick reappropriation of the iPhone's built-in LED camera flash and iOS' "LED Flash Alerts". A 3-part, multi-colored case, FLASHr intertwines the LED power of your phone's camera flash with a choice of see-socket-searing Glow Frame hues to produce a nifty shroud of neon notification when you have incoming calls, texts, emails, and social media/gaming pushes. Now, even in silent mode or sprawled on the table amidst a mess of other smartphones, you'll always know when the multi-media communication device blowin' up like a pregnant chick working at Dairy Queen is yours.

To emit its potent glow, FLASHr's reflective aluminum plate bounces the LED flash's light rays back into the case, where the Glow Frame absorbs and radiates them in all directions, such that the resultant colored light is visible from any orientation. (See diagram above for a flow chart of the FLASHr's admirably simple design and process.)

Each of FLASHr's 3 components, the Outer Case, Glow Frame, and Reflect Plate, come in the buyer's choice of 5 colors, for a total of 125 possible spectral combinations. Theoretically, that means even if 124 friends and I all bought one, we'd never get them mixed up, but we drink a lot, so probably we still would. But you and your friends wouldn't. Outer Case colors include Inferno, Aqua, Grey, Black, and Magenta. Glow frames are available in Red, Green (featured photo), Blue, Yellow, and Clear. Reflect Plates come in a choice of Pink, Green, Yellow, Silver, and Black.

All Kickstarter pledge levels that return a FLASHr case ($30 and up) allow buyers to select their color combinations. DeArk and Green have also developed a few signature combinations with sweet names, such as "Ghostcase Killa" in a Gray Outer Case, Blue Glow Frame, and Pink Reflect Plate; "LMFAO" in Magenta, Yellow, and Green respectively; and SilverFox in Grey, Clear, and Silver. For a $50 pledge, backers receive the Kickstarter Especiale, a limited edition FLASHr in a Clear Outer Case, with Yellow Glow Plate, and Green Reflect Plate.

The $30 backer price is the Early Bird rate for one FLASHr case. Once the guys have sold 250 of them, the single case price is $35. For $60, backers get 2 cases, and for $140, every part of the case in every color, for mixing it up to match your ever-changing tastes and moods. The FLASHr project runs through August 24, 2012, with expected FLASHr delivery dates of October 2012.

FLASHr mastermind DeArk is a mechanical designer at Function Engineering, and Green is a professional NOLA musician whose artist's touch juices up the visual magnificence of the team's brainchild. The two, via their company Phaze5, plan to source FLASHr fabrications to manufacturers in Atlanta and the Bay Area, and handle all assembly, packaging, and shipping themselves.

November 2013 Update: FLASHr did not reach its Kickstarter funding goal, and is currently not available for consumer purchase.

There's nothing particularly funny about the iWALK LinkPod Portable Charger, I can't not show some Fozzie the Bear love after seeing the name. So here goes: the LinkPod is a 4800mAh fast-charging power bank you can stuff...

These are aptly named. An ingenious piece of technology wrought from Asian women's desire to have larger eyes, these seem more fit for the drug-and-urine-splattered concrete floor of the next rave in Omaha, Nebraska...