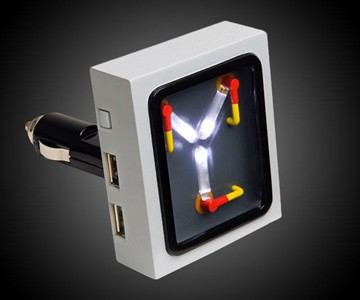 ThinkGeek should just pretend it's April Fool's Day any time they have an idea for a product and want to test out its potential for success on a focus group of, like, half a million people. The Flux Capacitor USB Car Charger is yet another gotcha! toy turned toy ready to take down your credit card number and shipping information.

The officially-licensed piece of Back to the Future merch may not be sized to scale, or function exactly like its prototype, but at least will do more than sit there and make you look pitifully stuck in the 80s awesome. Compatible with any device that charges via USB, this Flux Capacitor has 2 charging ports that each output 2.1 amps of power, or enough to re-up 2 tablets simultaneously.

So even though it won't help blaze your gunmetal gray DeLorean back to 1955 (or forward to 2015; though at this point we're all probably pretty cool with just waiting) I bet if circa 1985 Doc Brown saw the Flux Capacitor as a USB car charger--and especially the newfangled tech of the smartphone it's charging--it would still be enough to elicit a Great Scott! of approval.

When turned on the car charger mimics Flux Capacitor lighting effects. It has a pivoting arm to facilitate fit in a variety of vehicle power port configurations. Dimensions are 2.5" x 3" x 1".

The Flux Capacitor USB Car Charger is a top Dude Gift for a Geek pick.

Rumors abound that Nike will be releasing the Nike Air Mag shoes Marty McFly wore in Back To The Future II. This could be the biggest sneaker news since... sneakers started making the news. I can't wait to get a pair...

Back to the Future DeLorean iPhone 6 Case

Like the Crazy Case Batmobile, Bandai's Back to the Future II DeLorean case for the iPhone 6 is forthcoming. And while it would be a grand and poetic gesture for the Japanese toy company to set their lit-up, pimped-out...

See, sometimes you can have too much of a good thing, but other times...you should turn every possible 21st century EDC item into a flux capacitor. That's ThinkGeek's current modus operandi. Hot on the heels of their...

Back to the Future II Light Up Shoes

In 2011 Nike made 1,500 pairs of Marty McFly 2015 Air Mag replicas and auctioned them to benefit The Michael J. Fox Foundation for Parkinson's Research. Rumor has it the company will release another round, this one with...

No stranger to manipulating sound, and no stranger to successful Kickstarter projects (we previously covered the Soundlazer), Richard Haberkern believes he has created some legitimate Hoverboard technology. Without magnets...

Time Machine Rental.com will neither confirm nor deny the functionality of their DeLorean's flux capacitor, but they do make mention of animated interior interfaces and buttons and switches that light up like a Christmas...

Here we have the one single thing* Back to the Future II got right in its big-screen predictions for the 2010s: trippy-looking neon spectrums are indeed the current rage. The pillow, the double rainbow hula

Romain Jerome's DeLorean-DNA timepiece isn't just some highfalutin gimmick intended to make me sad I do not possess $17,200 American dollars. Wait, yes it is. And it's working. Because not only do the watch's rhodiumed...

I used to pick up ladies by telling them I drove a DeLorean. It's how I met my girlfriend, She-Ra: Princess of Power. I went up to her at a party, ready to drop my pickup line, when she turned to me and said, Before you...

Back to the Future Hoverboard Doormat

"Hey McFly, you bojo! Hoverboards don't work on water!" Haha, suck it, Data! This hoverboard was made for water. And snow. And dirt. And that hunk of dog shit stuck to your Nike Air Mags some Biff of a pet owner didn't...