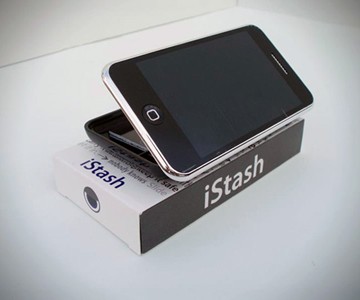 iStash. Quite the restrictive--albeit clever and sort of fun to say--name for an iPhone imposter that's really just a slick combination of a pseudo-phone and a wallet. I mean, sure, it will covertly house cigs, lighters, and herbal refreshments, but iStash will just as handily store cash, cards, a key or two, a stick of gum, and a few condoms from the vending machine. So while concert-goers and club kids who want to hide the shit they're carrying on their person are gonna love the iStash, so equally would many of the rest of us who mostly stopped tokin' out after college, but who also want to hide the shit we're carrying on our persons. Why spotlight the puffing paraphernalia angle? Why not target the larger market of devious and thief-evading folk?

Regardless of intended demographic, the iStash remains a cooly compact means of discreetly carrying whatever it is you would like to discreetly carry. Also, it costs a mere $10.

Ha! More proof that if pens wish to avoid extinction they better start bringing more to the table than a barrel full of ink! In fact, Grasshopper makes the biggest leap of all--the one I've been waiting for: it eliminates...

These Bong Butt Plugs are smokin' hot! Though I'm not sure if it's from the Blue Dream or the 3 bowls of Four-Chile Chili I ate during NFL Sunday coming out of them...

Kick back and take in the landscape with a cup of AirScape. Or rather, a cup of coffee brewed from beans and grounds stored in air- and humidity-impenetrable AirScape Storage Canister...

Koko Nuggz weed-themed treats are so fun, so poppable, and so full of sugar and Rice Krispie carbs that even without the THC they'll probably get you high. Or, according to the Koko Nuggz nugget bakers, at least "shock...