The Face of Siri iPhone Cover 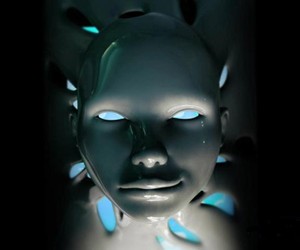 Still wish you could put a face to the name? This visual interpretation of omniscient audio-lord of the iPhone, Siri, was SaGa Design's entry into the Siri Design competition, and can now be part of your iPhone cover collection--and your nightmares--for eternity. According to manifested Siri's Gary and Wyatt, she has an androgynous face with a "wry, elusive smile suggesting the machine knows something that the user does not." Uh...more like an animalistic, she-male face with a sinister grin suggesting the machine is about to stab the user with the Swiss Army Knife it shares a pant pocket with.

But if you're into that sort of thing, you'll love that the iPhone's glow is not only visible through, but adds another layer of creepy depth to, the face's sculpted white visage. And even when Siri in the plastic composite flesh is obscuring the screen, all of the phone's major buttons are still accessible.

The purpose, SaGa claims, of creating a Siri that so fully masks the iPhone touch screen, is to force her significant others to interact with her, instead of merely keeping her at their beck and call to complete menial tasks and satisfy their (80% of the time twisted) whims. However, for endeavors that you find easier to, er, do by yourself, the case is easily removed and stored. Though she will always be watching....

Oh, and for those who want to drop an even more serious wad of cash on the face of Siri, you can also purchase a gold plated glossy version of the case for $350.

Hear me now and believe me later, Google Home Muscles is here to pump! You up! Or at least, like, set a timer and play "Sexy and I Know It" while you work out on your own...

Framed artwork made of broken-down old phones and obsolete electronics (elderly and wizened gadgets, if we're being polite to the generations that came before us.) Now that is a piece of home decor I never knew I always...