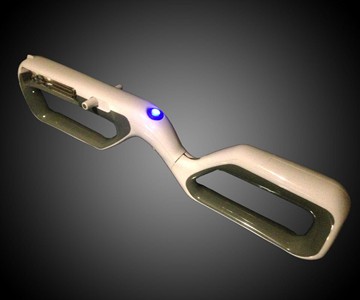 Here's a 445NM Infinity Blue Laser Blaster by Tony Starks. I don't know if that's his real name or not, but if so now we know that having just one letter more than Iron Man makes you Laser Man. The trapezoidal-rhomboidal-pieced blaster with its shooting indigo beam looks kind of like Portal meets the rails of a hospital bed. It can do all of everyone's favorite laser tricks, such as popping balloons 3 in a row and burning through an angular hunk of hard plastic such that bluish smoke wafts all moodily from its ends.

Starks doesn't have much else to say about his creation, except that interested parties can contact him here with questions, or just head over to Etsy and buy their own.

With both Comic-Con 2012 and Dude's S3 Arctic Laser Giveaway in full swing, how could we not bring you this feast of power, this champion of Cosplay, this intergalactic harness of pure Storm Blue or Ghostbusters Green...

The World's Most Powerful Flashlight

It's the 21st century. Who buys a flashlight whose only capability is to shed light anymore? When I'm looking for my 1:12 scale Voltron in the attic, hunting zombies in the Ozarks, or self-examining my throat for the...

I grew up with fireflies. And by that I mean I grew up squashing them and rubbing their bioluminescence on my arms and legs so I too could glow like a superhero or anomaly of evolution. I never saw any blue ones though...