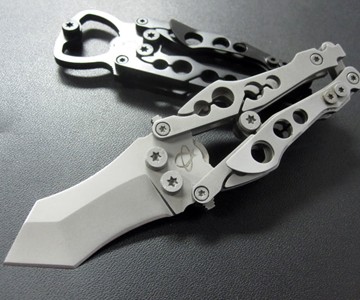 $40
from Mantis Knives »
Check It Out

The Bottleneck butterfly knife: skin a deer, then pop a beer. Mantis Knives teamed up with fraternal duo Gavin and Grant Hawk a couple years ago to design a special blend of blade. The Bottleneck BK-3b is sized like a keychain, with a bottle opener at one end, and two petals of 400 series stainless steel at the other. The petals sweetly bloom on command to reveal a squat but jacked, 1.99", modified tanto edge stainless blade. The Bottleneck's overall length is 3.75".

Not into slicing or stabbing? The Bottleneck may still have a place alongside the house keys. For those days you need to sever your shoelace when it gets stuck in the escalator, and causes a domino pileup of angry escalator riders, and afterwards all you want is to unwind with a bottle of Mexican Coke. Or for those nights you feel like alternating between uncapping fancy microbrews to sip, and gouging cans of Miller High Life to shotgun. And if American law enforcement is a concern, don't worry--Mantis assures us the Bottleneck is legal in 50 of the United States. They do, however, neglect to mention in which four, then, it's not legal. There's no way Alaska and Texas wouldn't be down with this compact orgy of slashing and boozing, so...after consulting our common sense map of the US...we're going with Canada, Utah, Oregon, and Southern California.

An elephant never forgets, and with this elephant neither will you. At least not when it comes to where you put your keys, since the elephant end of the Elephant Keychain nestles snugly inside a wall-mounted elephant...

The Schrade SCHA5B M.A.G.I.C. folding knife listing neglects to explain its M.A.G.I.C. acronym, so at first I thought maybe it didn't stand for anything, that the caps and dots are just there for their imposing, visual...

Each of these Higo no Kami knives, traditional Japanese non-locking folding blades, are handmade and imported directly from Japan. And if you don't believe me, believe the superb English translation of their product description:...