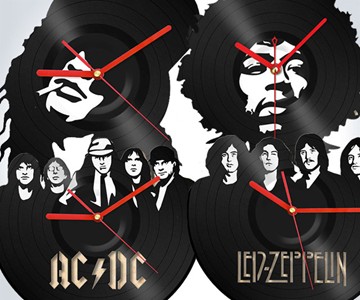 It's pretty sweet how Thai artist Anant Lopas chose Slash as the lone Guns 'n' Roses personality to turn into an intricately carved vinyl wall clock because it means that even people in the Far East know Axl is a poon. In fact, Slash is one of only a select few individuals to get the rock god timepiece treatment, keeping pretty good company with Jimi Hendrix, John Lennon, Elvis, and Mao Tse Tung. Yes, it seems the former Chinese dictator could shred a Gibson respectably enough to earn immortalization in vinyl. Hey, if Dennis Rodman can be all chummy with the BSC rulers of North Korea, I can certainly believe Chairman Mao knew his way around "November Rain".

The Gods of Rock vinyl wall clocks encompass over a dozen bands of yore, and a couple that are still hanging around today, even though they are sort of ungodly in age and appearance. Ahem, Rolling Stones. In addition to the featured shot of Slash, Hendrix, AC/DC, and Led Zeppelin, turn it up to eleveners include:

All clocks are crafted from used, 12" records, and run on a single AA battery. Lopes also promises they won't make a ticking sound, which may seem inconsequential, but believe me, you will appreciate this feature. I have a wristwatch that ticks so F'ing loud that if I wake up in the middle of the night I can't go back to sleep until I shove it under one of my couch cushions. And while I've seen a few other clocks employing vinyl in similar homages to rock & roll, Lopas' seem to be significantly less expensive, particularly given their apparent carving quality. What can I say to that, other than cheers to the USD exchange rate and importing things from Thailand!

First thing's first: if you want to see what's so special about Rhei, fast forward to 1:50 in the above video to bypass the dramatic buildup and jump straight to the action flow...

I don't know what the "BOGO" in the BOGO Khonsu Clock Lamp means, but I'm betting it's not "Buy One Get One." That would be nice, though, because then I could give one of the design-y designs as a gift to someone worthy...

The Etch clock engraves every minute of your day into stone. Figuratively speaking. Really it uses the trickery of 3D digital numbers and a colored elastic membrane to give the eye-catching appearance of chiseled time...