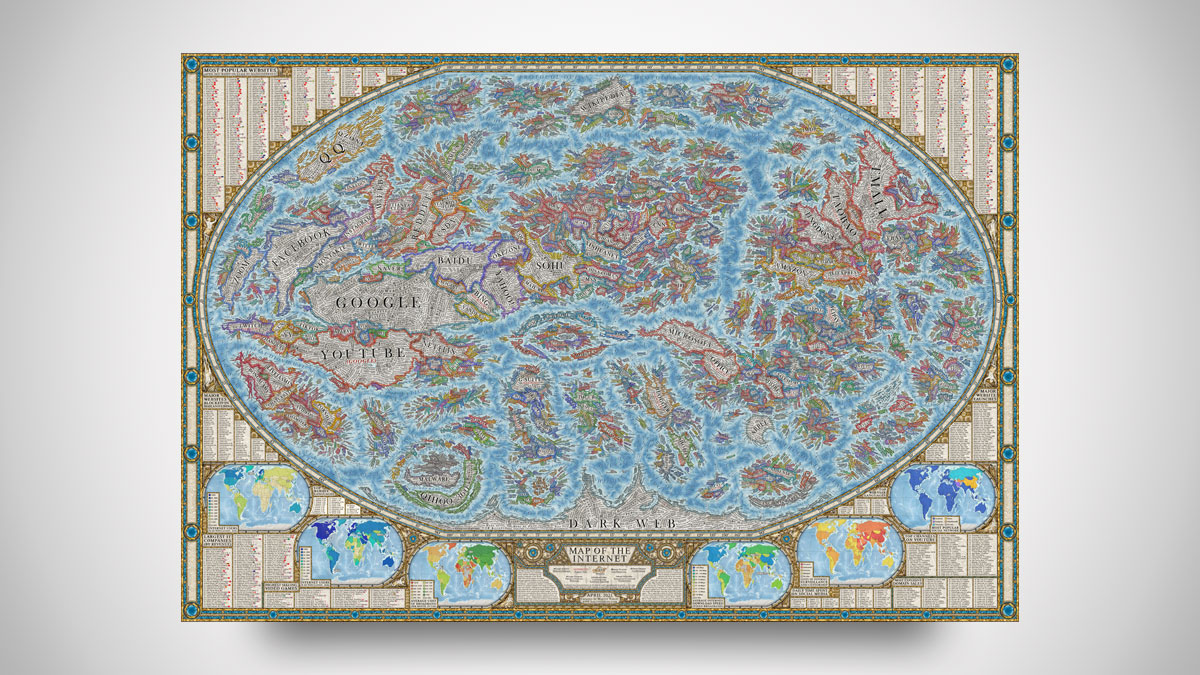 I mention 2014 because that's the last time Vargic updated his Map of the Internet (he called it 2.0.) He says the 2021 revision is "many times more detailed and informative," with several thousand popular websites represented as countries, and grouped together by category to form continents and regions. Categories include News Sites, Search Engines, Social Networks, E-Commerce, and, everyone's favorite, Adult Entertainment.

Within website countries, Vargic pens in their founders and CEOs, represented as capitals, as well as some of their most popular users and celebrities. Geographic features become elements of internet culture and computer science, and underwater ridges are played by important internet and computing pioneers. Like, probably, Al Gore.

Surrounding the Map of the Internet 2021 www.orld layout are charts ranking the most popular websites, largest internet companies, major sites blocked in China, and best-selling video games of all time.

Vargic offers those who want to dive even deeper into the rabbit hole a high resolution image of the Map of the Internet 2021 here. Prints are available in various sizes and paper types from Zazzle.

Vargic is a formidable cartographic artist, not just in his ability to design and create such striking map-sterpieces, but also in his willingness to map out hot and controversial topics. Map of the Internet is fascinating, yes, but if you head over to HalcyonMaps and browse Vargic's entire collection, you might be even more sucked in by some of his darker projects: The Map of Stereotypes; The World - Climate Change; History of School Shootings in the USA; Unarmed Victims of Deadly Police Violence in the United States.

Butterfly Labs' entry level Jalapeno Bitcoin miner sells with a mining rate of 5 G/Hash per second, as well as with an upgrade that bumps its performance to 7 G/Hash per second. And while both are pretty paltry in comparison...

Jay Simons and Martin Vargic: students; graphic designers; Slovakians; Internet cartographers. If the Web were divided into land masses, grouped along lines of latitude and meridians and flattened into a map on your desk...

I always wear my heart on my sleeve, my egg on my face, and my internet passwords on my wrist. And surprisingly, the Enigmaze Internet Password Bracelet may be the best of those 3 decisions...

To be clear, the Internet flies in only one direction down Outernet's information superhighway*. Each day, a 1 GB dose of data funnels through a dish antenna and lands in the company's Lighthouse receiver, where it is...

Like the Cybertecture Mirror from Tech2O, POSH View's iMirror seeks to bring the internet to a place the company says we spend over 168 hours, or 7 full days, every year: the looking glass...

Remember the good old days when a computer screen was a shield of privacy, a veil of mystery, an incognito way to surf raunchy websites and cyberstalk first loves? Well, SurfEasy is your USB-shaped DeLorean to the times...

The Cybertecture Mirror allows us to gaze simultaneously upon the two things we like gazing upon best: the Internet and ourselves. A glass reflection of both beatific mugs, and streaming Web content, the futuristic mirror...

Imagine snapping your fingers and--poof!--more coffee, bottled water, and toilet paper just show up at your door. Amazon Dash Buttons are like that, but maybe even better because pressing a button is actually way easier...

SilentKeys launched its Kickstarter campaign today, seeking your funding for your privacy. This plug 'n' play USB keyboard connects to any computer and turns all key strokes and actions you complete while using it incognito...

KFC says their Internet Escape Pod, featuring a fried chicken drumstick door handle and Stretch Armstrong Colonel Sanders passed out drunk and slung over the top, is meant to help you hide from the barrage of Cyber Monday...

What Winston here is suggesting is online privacy. Total browsing anonymity. Scrambling your internet activity to strip away invasive corporate tracking and surveillance that don't just record your activities, but also...