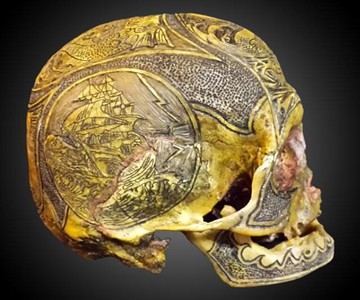 Then one Friday - the Friday after Thanksgiving when Zane Wylie was 12 - Zane Wylie's mom was about to hack up a turkey carcass to make stock, and Zane Wylie was like, "Hey can I see that for a sec?" Reluctantly, his mom handed him the bones and a knife, which Zane Wylie used to carve the entire illustration of that kid's leg getting eaten by a boa constrictor in Where the Sidewalk Ends along the turkey's backbone. An artist was born.

The moral of the story: don't let your mom pigeon hole you with Play-Doh and paper products. Find a medium that speaks to you and turn it into art. (My mama would like to add this medium should preferably be one that earns enough money to get you your own place, or at least chip in on the groceries every once in a while.)

The medium that truly speaks to Zane Wylie, presumably not discovered until some years after his turkey awakening, isn't carcasses but skulls. Human skulls. Real ones. He carves them, intricately and elaborately, with themes ranging from Celtic warriors to Asian dragons to Russian sea captains. The skull featured above depicts the life of Vadim Konyashev, a salty child of the Laptev Sea who grew up on the bow of his father's ship. On the day his father died, Vadim took a bottle of vodka from the man's 3-fingered hand and realized he was raised with such crudeness and tyranny so that he would learn to be strong enough to carry the legacy of leader of men when this moment came. Wylie continues the story:

His father's blood, now starting to freeze to the outside of the bottle glistened as Vadim held it high and drank it empty. The crew's cheers were cut short as the empty bottle shattered against the forehead of a crew member. "Next man who thinks celebrating is more important that working eats this glass!"

Who knows if the tale of Vadim Konyashev is real or not - maybe it's total BS like my tale of Zane Wylie - but either way, the captain's immortalization as etchings on authentic dead head bones seems fitting. And pretty awesome.

All of Wylie's real human skull art is available for purchase through his website above. He also sells carved replica skulls.

A skull glasses stand, now there's a clever accessory for your lensed accessories. Not to mention a sweet gift for your favorite bespectacled biology teacher, skull-loving goth, deathly cool rock star, or self-important...

Who wants to skull a beer? The Brainfreeze Skull Beer Glass & Stand holds up to 12 ounces of your favorite brew, cocktail, sodie, or juice, pooling about half of the drink in a skull-shaped "boot" molded out of the bottom...

Time to surprise my girlfriend with a romantic night by the fire. And a romantic fire filled with human skull fireplace logs. Who knew bone made such fine kindling?...

A sick skull toilet with LED eyes and a host of smart features called...the WaterThrone? Doesn't really reflect the toilet's sculptural uniqueness, or its creepiness, very well. I would've gone with BoneThrone. The Head...

Sap is an interesting word because it can connote both a sorry, pathetic loser and an object of grit and power that will F your S up. Here we will talk about the second version of sap because, in honor of summer's official...

Adopting its name from Mayan lore, the Doomed Skull Shot Glass is here to help you ring in the apocalypse. It won't ward off zombies or cataclysmic solar flares or anthrax-laced rain drops, but it will get you so wasted...

Today...it will storm like the end of days! Muahahahaha! And tomorrow...it will be sunny and 75! Muahahahaha! The weather may not always be ominous, but with this Storm Skull Weather Predictor, your forecasts for it will...

As provocative and...meaty...as the Human Skull Bowl photo above is, scroll on through the Additional Images gallery. Keep going. All the way to the end, where you'll find the one that turns a macabre creation perfect...