The World According To Americans 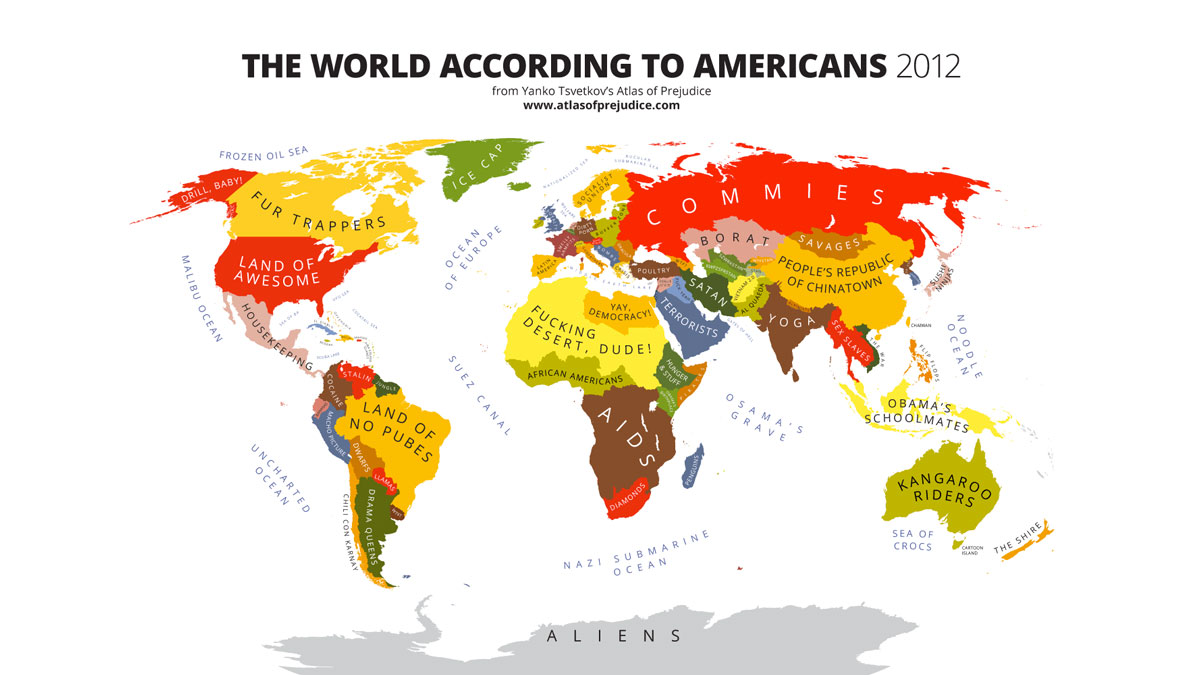 With the possible exception of the "AIDS" label that's covering half of Africa, some of these American stereotypes of the rest of world are surprisingly lacking in wickedness. I would have expected less superficial ignorance, and more low blows from the country that claims to be the best at everything. I mean, even my grandma had an arsenal of colorful words to describe Japan, and all of them were way better than "Toyota". Alaska is "Hockey Moms," not "Evolution Stopped Here"? India is just "Curry," instead of "Curry-Scented American Jobs"? Greece is "Democracy," over "Please enter at rear"? Could we maybe get a Trey Parker and Matt Stone revision of this map?

Mainland USA, According to Common Sense

The sad thing is, I'm pretty sure all of these "jokes" are based on actual statistics from the US Census. The other sad thing is, I bet the 95% of us who couldn't name half of the color blocks when looking at a blank...

Lost in the Woods: 15 Items to Help You Find Your Way

These 15 items that help you when you're lost will find north, map routes, illuminate dark spaces, and, when all else fails, SOS your stranded self some help. In other words, they will pretty much ensure you dudes and...

Jay Simons and Martin Vargic: students; graphic designers; Slovakians; Internet cartographers. If the Web were divided into land masses, grouped along lines of latitude and meridians and flattened into a map on your desk...

In case there was any confusion, Poundtown Condom vendor Say It with a Condom specifies this particular latex shroud is for "anyone who's a Poundtown regular, or is coming for the first time." Haha, get it? There are...

Monsters in America: A Cryptozoological Map of the United States provides descriptions and locations of origin for beasts ranging from the Jersey Devil, Bigfoot, Mothman, and Chupacabra to Shunka Warakin, Caddy, the Honey...

Memories of the most beautiful, challenging, momentous trail you've ever traveled become a custom, 3D work of art, courtesy of Topo Trail Maps. Out of his studio in Oregon, Trevor Crosta handmakes every Topo Trail Map...

All foodies and hungry people know the best way to go through the USA is to eat your way through the USA, and this American Foods Scratch Off Map is going to make easy work for all the big and adventurous travelers with...

Where I've Been Scratch-Off Map

What a fun way to track your world travels, or clever gift for your favorite ostentatious globetrotter with a mild gambling compulsion! One side of the 16.5" x 12" map is covered in a metallic patina that scratches off...

The Mapper of Every Rapper

An organizational, poster-sized map of the music industry's 636 most prolific rappers: magnificent homage or elaborate slam? Divided into major categories and subcategories, such as Audacious Misspelling, Macks, Coolness...