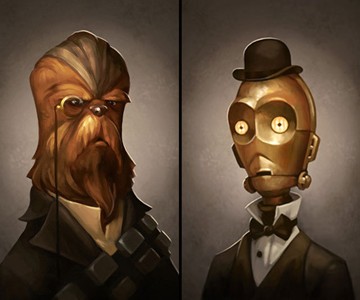 The Star Wars boys give a pretty decent representation of Victorian times, huh? Jabba the Hutt almost looks dapper. Or at least less like the massive wart my friend Cornelius grew on the inside of his arm when he went to hunt snapping turtles in Texas one weekend. Chewie looks very poised as well. A little judgmental though. Not really the face I want to see staring back at me at 3 in the morning after I've polished off a couple dozen Bagel Bites and watched another soft-core porn on HBO's late-night lineup. Were I to buy one of Greg Peltz's steampunk-inspired galactic portraits, I'd stick with the helmeted Boba Fett. No eyes, no unspoken smugness.

Peltz has created a series of 5 Victorian Star Wars prints. First Mate (Chewbacca), Copilot (R2D2), Metal Man (C3PO), Headhunter (Boba Fett), and Kingpin (Jabba the Hutt) are part of a very limited edition of giclee portraits. Each measures 9" x 13" and comes hand-numbered and framed on canvas. A Certificate of Authenticity is included.

Ho, ho, h-oh no! Santa Claus has gotten himself into a Carbonite pickle! He might survive as Han Solo did, but wasn't Han also frozen up in the stuff for, like, a year? Bad news, kids. I wouldn't waste my time with cookies...