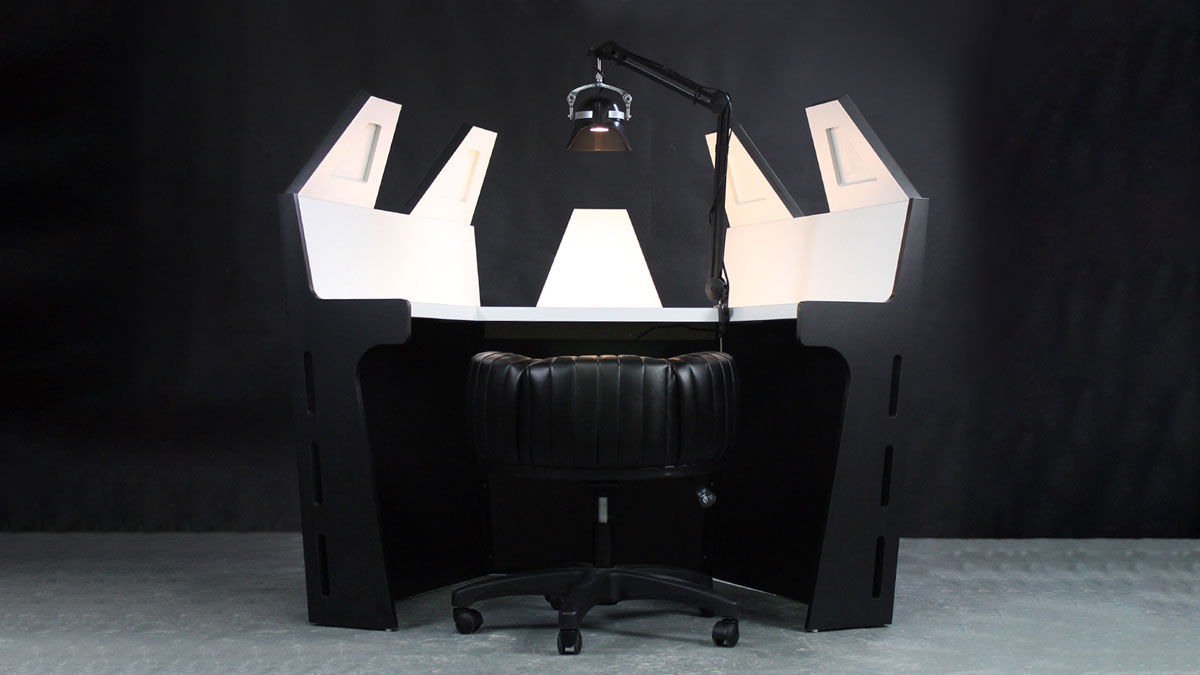 Darth Vader: Meditator. The Force meets the OM in this Darth Vader Meditation Chamber Desk Set, a Regal Robot design brainstormed and built custom for a client's studio, and based on the Dark Lord's meditation chamber in Star Wars: Episode V - The Empire Strikes Back.

If you remember - and I know you Star Wars diehards do - Vader used his meditation chamber as an escape from his helmet and mask; the pod provided its own form of life support, and was the only place he could survive for any length of time with his face exposed. It was a freeing retreat, a relaxing respite from the chaotic and villainous life of a Sith Lord. So, very fitting for a...work desk?

I think if I were going to loosely replicate Darth Vader's meditation chamber, I would have made it into a bed.

And I - and you - still can. Again, Regal Robot's Darth Vader Meditation Chamber Desk Set is a OOAK piece made custom for a client who collaborated on the design. If you want something similar, you can contact Regal Robot and commission your own, perhaps tweaking the plans to turn your Meditation Chamber into a king-sized bed. With a surround sound speaker system, pop-up TV, and mini bar. And maybe Vader's helmet serving as a combo movie projector and sunrise lamp. Now that sounds like my kind of meditating.

The Jedis may have the Force, but the Dark Side has power. Tons of it. Enough to take your iPhone, Android, or Windows mobile phone from dead to fully juiced and ready for battle. One round with the Darth Vader lightsaber...

When mere pushing, grunting, and clenching every other muscle in your body while sitting on the toilet doesn't work, use The Force. Or at least stare at this Use The Force bathroom art hanging on the wall for some comic...

I Will Not Be Your Father Condom

Nice. A condom to carry my message to all the unborn children in the world. Attention would-be zygotes! I WILL NOT BE YOUR FATHER!...

Ural's Dark Side has...bench seating and a sidecar? A trunk? A max cruising speed of 70mph? The company, a US-based affiliate of Russia's Irbit MotorWorks, has just released the Dark Force motorcycle. It won't take you...

Costume Craze has released a whole line of Second Skin Star Wars suits for 2013, but I feel like if a man is going to put a definitive outline of the family jewels on display, the face of a Wookiee would complement them...

Father-son lightsaber battles over Kung Pao chicken are about to get the LED treatment. Original lightsaber chopstick fabricator Kotobukiya continues its journey through their Galactic Republic of Replica Awesomeness...