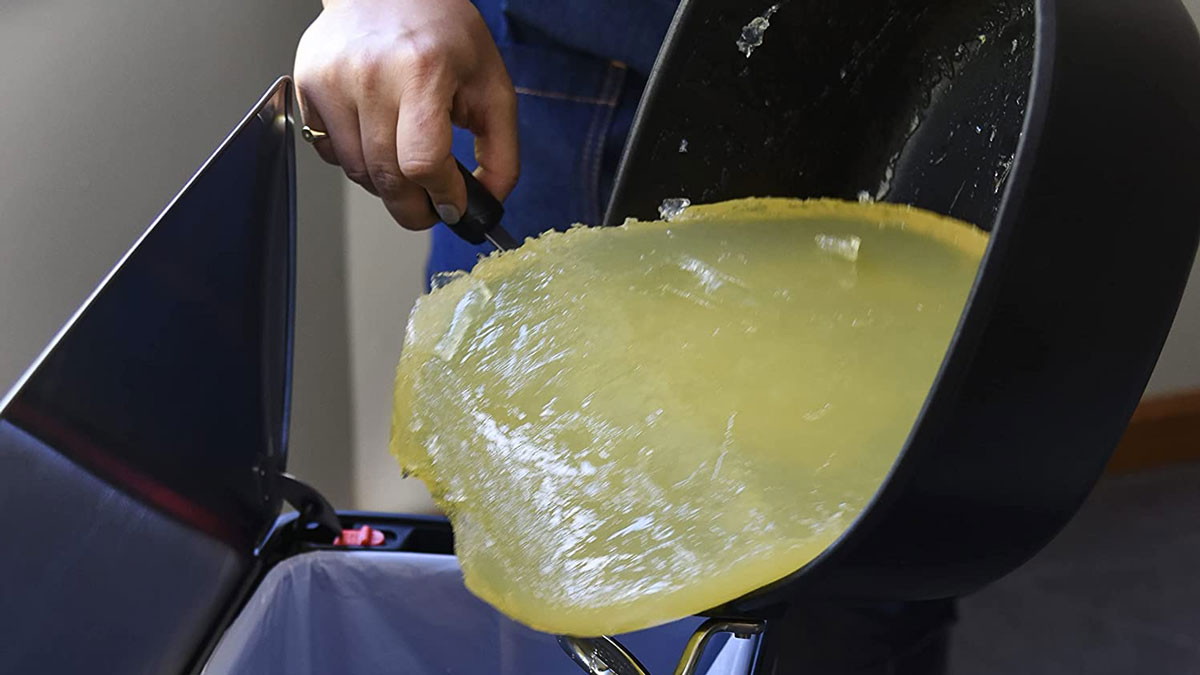 A Fatberg is what happens when you convince yourself it's OK to pour used cooking oil down the drain and just run a bunch of hot water to help wash it through the pipes. It's just a little bit, no big deal, right? ... Wrong! It is a big deal. A Fatberg-sized deal, if it advances far enough to start building one of these mountainous masses of waste in your sewer system. (Note that another way you may be flirting with Fatberg formation is those "flushable" butt wipes that feel so good, but clog so bad.)

Even if congealed oil doesn't build up enough to erect a Fatberg and ruin your home's entire plumbing system, it can still coat your home's pipes just like it does your body's arteries, and create clogs. And the alternative, tossing spent cooking oil in the trash, can be messy, smelly, and, if spilled, equally painstaking to deal with.

FryAway is a quick-congeal powder that turns cooking oil from liquid to semi-solid as it cools. The company says it makes it much easier and cleaner to toss oil in the garbage, and eliminates the urge to pour any amount of it down the drain.

FryAway is 100% plant-based and non-toxic. To use it, sprinkle some into an oil-filled pan after cooking, when the oil is still warm, stir it up, and then wait for the oil to cool. Then scoop the gelatinous mass that remains into your trash can.

FryAway comes in Pan Fry and Deep Fry packs, the former for foods cooked in up to 2 cups of oil, the latter for solidifying up to 8 cups.

I wish...I wish...oh I wish I had some dry aged beef carpaccio topped with shaved Parmesan and arugula, and drizzled with some cold pressed extra virgin olive oil from Tuscany. Gasp! Thank you, Oiladdin!...

Tons of toaster ovens do more than just toast, but I like the Breville Smart Oven Air's additions of frying and dehydrating to the countertop cooker game. Using Element IQ technology, or the thing that allows them to...

I have a hard time believing that fried food tastes like fried food if it's not fried fully submerged in the succulent greasiness of oils corn, palm, peanut, or pig. But, since I'd prefer not to have my first dance with...

While the Fryin' Saucer, an outdoor propane deep fryer, can't perform as many tricks as the similarly-fashioned Blacktop 360 Party Hub grill, it is much more compact and portable, and could prove be kingdom come for anyone...

We all know there are 2 failsafe ways to make any food taste good: 1) Add bacon; 2) Batter and deep fry. Too bad both make you tub out and smell bad. However, for those intent on eating their nightly helping of fried...

Philips has its own oil-less air fryer similar to the Big Boss model I previously pointed out will make you less likely to get fat and have a heart attack. Actually, Philips has two AirFryers: a simple version w

Double up on the fish & chips and nuggets with fries, or cook one big vat of extra crispy fried chicken with Secura's triple-basket deep fryer. The electric countertop model contains a 1700-watt immersion element said...

Hate to waste all that bacon grease after cooking up a slab of thick-cut applewood smoked strips. That's good stuff. It really beefs (porks?) up my fried eggs. And my chicken & waffles smoothies. But when there's too...

It wasn't deliberate, but turns out these 14 sustainable gift ideas aren't just eco-friendly products ready to be wrapped and presented to all the environmentally conscious cats on your Christmas list this year, many...