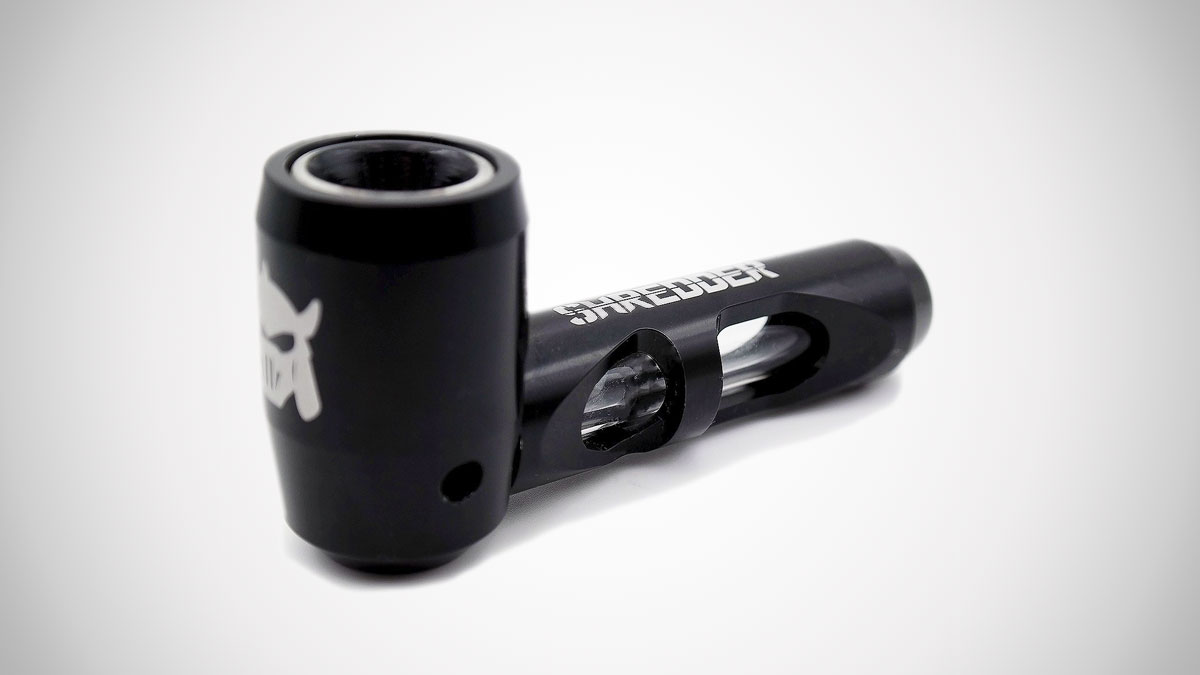 Shredder says they named their glass and metal pipe the Samurai Steamroller because, "Much like the armor once worn by the Japanese Samurai, our products are designed to outlast any competition." So, not because it's a modernized design of a pipe a samurai might have smoked, and definitely not because smoking...whatever you're gonna smoke out of it...is going to turn you into a samurai.

Though it might turn you into someone who believes he's a samurai.

The Samurai Steamroller has an exoskeleton machined from anodized 6061-T6 aircraft grade aluminum, which protects its interior borosilicate glass passage from drops and attacks from Mongol pipes. To protect the glass from its own armor, Shredder has fitted the pipe with shock-absorbing rubber gaskets, and to protect you from inhaling fire and particulates, ember- and ash-blocking 304 stainless steel screens.

On a final note, Shredder points out that if you get the Samurai Steamroller pipe you'll definitely "Look like the coolest MF person at the party."

Romance of Men Build Your Own Katana

By: Romance of Men »

It's DIY samurai time! Romance of Men's Build Your Own Katana collection offers budding builders and feudal warriors the opportunity to create a custom katana, choosing every component of the sword from blade material...

Onion! You bastard! Raw atop my chalupa you give me the breath of a dragon-sized chihuahua that just puked up a can of tuna fish. Dicing is too good for the likes of you. Prepare to be hacked to bits with my Samurai sword...

Don't bring scissors to a sword fight. Unless! Unless those scissors are katana-bladed samurai scissors! This pair of Oda Nobunaga Scissors by Nikken Cutlery have been designed in the likeness of powerful Japanese warlord...

Publisher Thames & Hudson's [Unofficial] Manual series covers all the greatest warriors in history, from samurais to to medieval knights, vikings to gladiators. Each of the part-entertainment, part-for-real books has...

Yesterday was May 4th and son of a bitch if I didn't bone the opportunity to run these Star Wars prints and say, "May the 4th be with you." And today is May 5th, another special day, particularly for the peoples of Mexico...

Tadayasu's Samurai Bottle Helmets kinda make me rethink calling my friends who drink only craft beer "fancy pants who put the 'micro' in microbrew." (Hey, I didn't say it was a good insult.) Because if they're fancy pants...

You've heard of Christmas in July, but how about Halloween in June? Yeah, me either, but this cardboard samurai costume makes me want to start the trend. It's even summer-ready, made entirely of paper products instead...