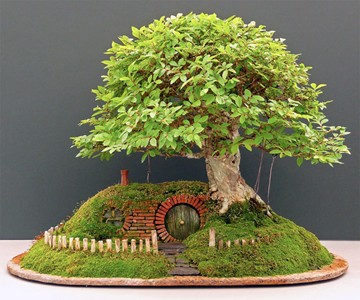 Whatever, I could make a Bilbo Baggins Bag End Bonsai. Or I could if I had the meticulous, exacting hands of a surgeon. But then I'd probably just be a surgeon because I bet it pays more than selling miniature Japanese trees. I can't say for sure though because, unfortunately, Hobbiton hobbit-hole creator Chris Guise isn't selling his Lord of the Rings floral masterpiece, just taunting us with photos of it on Flickr and Bonsai Empire. Hrrrmph. It's a good thing he named his account 1967geezer. If he hadn't, I sure would have.

The bonsai-fied Baggins residence appears to have the Gamgee family at its disposal as well, with perfectly maintained grounds and building facade, even during snowy winters. I like the added touch of the snowman. It should be in the shape of Frodo though. And Guise should put out a Gollum yard ornament for Halloween. Actually, I have a better idea: he should just give the trayscape to me. I'm not that good at taking care of things, but I think me and Bilbo's bonsai would have an epic two-week run before I sat or spilled beer on it.

Thousands of decorative lights from the palm of my hand to the branches of my trees, or spans of my walls in minutes. Minutes. Without the hassle of knotted wires. Without the danger of ladders. Without the frustration...

Control Middle-earth--and likely all male Elves, Wizards, Orcs, Dragons, Dwarves, Ents, and Hobbits--for under $100. You don't even have to enter into battle or acquire Rings of Power. Leave it to Black Milk Clothing...

Into the Woods Projection Light

Due to its being dramatic and showstopping and incredibly F'ing rad, Hilden & Diaz's Forms in Nature forest projection light sculpture has earned viral popularity this week. To the point that the artists are planning...

Hobbiton meets Harry Potter meets sustainable tourism. Montana Magica is a fantastical mossy lodge situated in a rainforest on the Chilean side of Patagonia, just under the Andes Mountains. It is one of several rental...

Antagonist. Necromancer. Lord of the Rings. SRG Armoury brings the darkness and malevolence of Tokien's Sauron to life in this custom-made Full Plate Armor Set. Constructed from 16 - 18 gauge mild steel, all suits are...

If someone twisted my arm put me into a Half Nelson and demanded I select some form of manual labor as my Sunday Funday activity, Granberg's Chainsaw Mill would be my first choice...

All the cuteness, half the care, and bunny ear succulents won't drop poop pellets all over your house when you bring them out to play. With the current popularity of houseplants, succulents in particular, and the impending...

Ladies, if you're wondering what dudes will say when you enter the room wearing a pair of Alanya Divine's custom-made silver elf ear cuffs, the answer is, "Yes, please." You like them for their craftily shaped argentium...

Hello, children. In today's lesson we will learn about death and gardening. First, meet Walter. Walter is dead. That's why he fits so easily inside this urn. Now meet the Spiritree. The Spiritree is also an urn, but it...