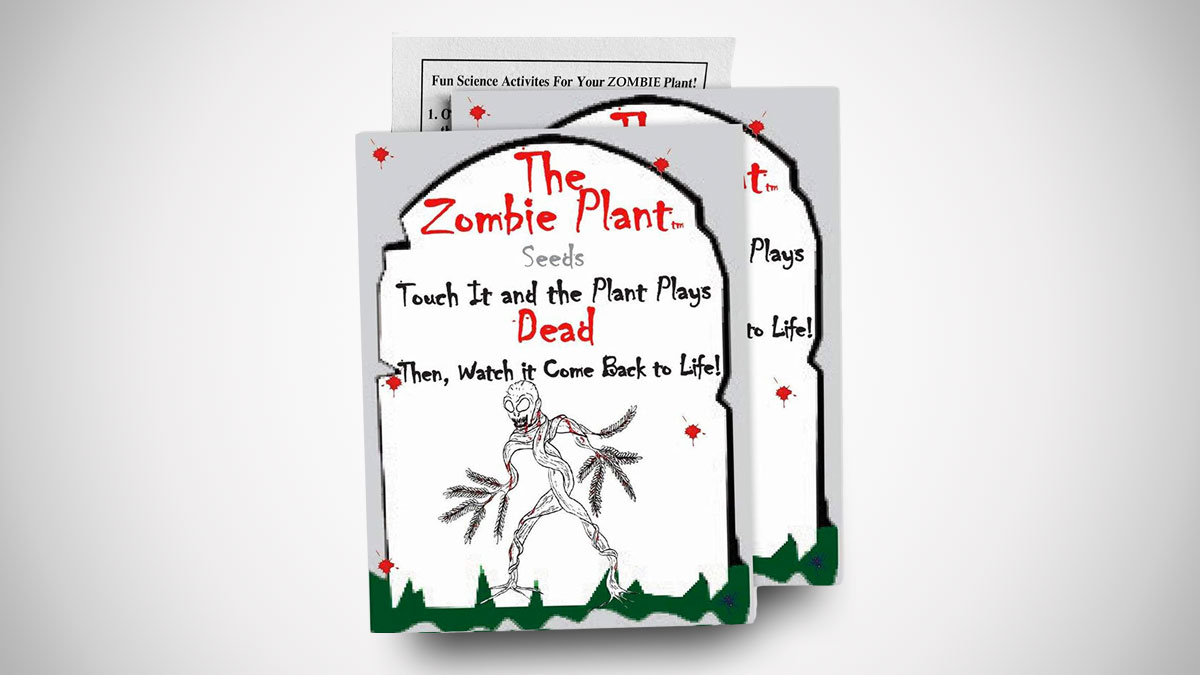 These Zombie Plant seeds are good for growing yourself a very interesting, and kid-friendly, kind of houseplant. It's called a Mimosa Pundica, and despite its colloquial name, this zombie-like plant won't try to eat you. Or your cat. Unlike the Venus Flytrap, it's not into flesh at all. And the Zombie Plant isn't so called because it's a trailing plant. One that grows long vines that appear to be coming for you, albeit at an awkward, lolling kind of pace.

Mimos Pundica gets its Zombie Plant moniker because it's a touch-sensitive plant. Tickle its oblong leaves, and they'll feel it as a threat, reacting by folding inward, trying to make it look like they're dead. But it's all a ruse and, after a bit of time and the plant's sense of danger passes, the leaves unfurl and come back to life. They rise from the dead. Like zombies.

But, uh, not really, because they were never dead to begin with. And also they come back to real life, not just a soulless, undead shell of one.

Still, calling something a "Zombie Plant" is a great way to get people interested in it, and if you need gifts for kids, they'll probably have fun growing the Zombie Plant, and then touching its leaves once it's mature. They may even listen for a minute or two to the biology lesson you try to give them about the nature of touch-sensitive plants while they do it.

Know how sometimes when you put a quarter in the gumball machine as a kid, you got ripped off and nothing came out? Well, that will definitely happen every time with this Gumball Machine Terrarium from Swingler Botanicals...

14 Ways to Turn an Interior Room Into an Outdoor Oasis

Winter weather. Pandemic. High-rise urban apartment building. Housing shortage. Correction, affordable housing shortage. These are just a few of the reasons I decided to brainstorm some ways to turn an interior room into...

The GrowCube is an automatic drip irrigation system that waters your houseplants while you're away, or when you just don't have the time or inclination to do it by hand. It's not a new idea - you can find several iterations...

MONITREE isn't really a money tree, but if you're of the mind that plants make your life richer, these living computer monitor vines should indeed increase your emotional net worth...

Nothing says Happy Mother's Day like a bouquet of sticky flowers caked with dead fruit flies and fungus gnats! ... And I'm only sorta kidding about that, especially if you need a gift for a mom who's also an avid gardener...

All the cuteness, half the care, and bunny ear succulents won't drop poop pellets all over your house when you bring them out to play. With the current popularity of houseplants, succulents in particular, and the impending...

I've heard of concrete jungles, but these modern planters are the first concrete islands I've seen. And unlike the cold, soulless jungles, Bella Vista Canyon's Concrete Islands are brimming with life - succulent life!...

When I hear the name "Willy the Worm," and think of what Willy the Worm might be used for, "water sensor for houseplants" isn't the first thing that comes to mind. Or the second. Those would be: 1) a tool to help you...