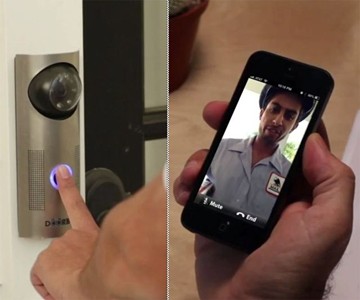 Last week I recounted my triumphant tale of Scrabble domination over a girl I once dated. At that time, I literally had not seen...or even really thought about...this girl for at least 3 years. But then I wrote about her competitiveness and inability to take a loss like a man and suddenly, a few days later, I walked into an upscale soul food bistro, and Bam! There she was! Mowing down on some brisket and fried okra! Unbelievable, right? So this entry is going to be all about Kate Beckinsale and how one time I kicked her ass at air hockey. And also about how I might have to get a DoorBot video doorbell for my smartphone, because I'm pretty sure Scrabble Girl is going to show up at my house any day now.

Created by Edison Junior (uh, that's an alias, right?) the DoorBot is a wireless doorbell and app combo that streams live one-way video and two-way audio directly to a smartphone or tablet. See and speak to visitors from the kitchen, the back yard, the john, even the grocery store 5 miles away. Ignore ding-dongs from Jehovah's Witnesses and sullen-faced children selling candy bars for their little league team and messengers serving subpoenas, but never miss another UPS delivery or visit from the girl next door returning your mail. Which you keep taking out of your mailbox and dropping into hers.

DoorBot's audio/video capabilities not only ensure you miss the visitors you don't want to see and connect with those you do, but also add a layer of security to your home when vacant, giving knockers the illusion that someone is home when you activate your app and have a conversation about how they should go away.

Perhaps even cooler, DoorBot packages optionally include the Lockitron system, a wireless automatic door lock which allows users to unlock the door for those they deem worthy of home entry. Again, from anywhere, home or not.

DoorBot recently achieved great funding success from Christie Street, and although its official campaign is over, interested parties can still make a purchase through the site. For $189 get the DoorBot on its own, and sync multiple iPhone, iPad, and Android devices to alert you when the bell rings and who's doing the ringing. Additional DoorBot features include: a weather-resistant, brushed aluminum faceplate; LED lighted ring that vistors push to talk; and an infrared camera that streams clear video both day and night.

For $339, get the DoorBot and Lockitron combo package. Lockitrons fit over currently installed dead bolts, and access to their lock/unlock codes can be shared with trusted parties for easy, keyless entry.

Estimated delivery for both DoorBot options is July 2013.

Another story about Scrabble Girl is that I went to Chile with her and we were walking around this tiny town near Puerto Varas when I saw a dog playing with a llama. No joke, they were hopping and pump faking and generally frolicking together around a grassy knoll. It was so awesome. I was all, "Holy shit, Scrabble Girl, look at that llama chasing that dog!" And she was all, "Whatever. I'm hungry. I want an empananda." Yeah, we broke up a week after returning to American soil.

Due to my hulking presence and penetrating stare, people usually know better than to try and steal...or touch...or come within 10 feet of my stuff. But I'll grant that theft, and pickpocketing in particular, is a worldwide...

If you're thinking this Invisibeam Field Disturbance Sensor for Vehicles is some real James Bond shit right here, you're...a little off. Despite its formidable, spy-worthy name, the Invisibeam Sensor is sort of just another...

The Havenshield Door Barricade is a home security device for quickly blocking interior access to intruders. It installs over any standard door in your home (or office or classroom) like a wreath. Not exactly a bearer...

The Add-A-Lock does one better than the portable intruder alarm: it won't just alert you when your one night stand tries to sneak back into your bedroom to sucker you into a committed, long-term relationship during which...

Ooh, a hidden door to a boudoir of lingerie and sex toys? Maybe pretending to be interested in books wasn't the worst, most boring mistake I ever made to get a girl to like me after all. Yeah, babe, I do see your first...

It's a screw cam! No, not that kind...well. What you use it for is up to you, I guess. But I'm calling it a screw cam because this miniature CCTV camera looks like the piece of hardware--a simple screw just minding its...

Tile may not be the first stuff-I'm-probably-gonna-lose tracker, but it appears to be the most ambitious. "The World's Largest Lost & Found" invites users to attach small square tiles (duh!) via adhesive backing or clip...