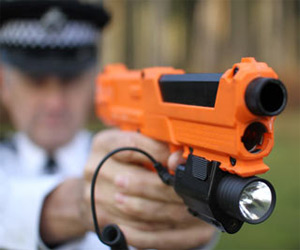 Genetics always triumph in the end. In the case of the SelectaDNA High Velocity DNA Tagging System, pellet-sized building blocks of life fire from either a pistol or a rifle at a target up to 100 to 130 feet away--typically a criminal, destroyer of the peace, or suspect otherwise deemed by law enforcement as "bad"--who would otherwise be challenging or unsafe for the shooter to apprehend. When the pellet hits it disperses a unique, non-toxic, short-chain ACGT code easily decipherable, as well as linkable to the gun that shot it, by a molecular genetic lab. It allows the police to "mark" people for takedown, drag-in, and questioning at a later time, in turn associating suspects with or exonerating them from involvement in a situation that could lead to arrest and prosecution.

Pellets use micro dot technology, meaning that upon striking they release pin-head sized flat circular dots just visible to the naked eye. The DNA code emerges under a microscope.

SelectaDNA developed its High Velocity DNA Tagging System with crowded areas and long distances in mind. Like protests and World Cup soccer games and good ol' fashioned cop-and-robber foot chases. Though I'm a little confused as to how tagging a potential arrestee is going to help in his/her capture if it's just some random person in a mob who the po don't know, and who manages to elude their pursuit. However, during major criminal acts, such as robberies and assaults, I could see the benefit of DNA-blasting someone in the back of the head, as those types tend to be repeat offenders or otherwise more easily located with the help of witnesses and Batman.

My other question is: don't these superficial double helices wash off? If I got caught sticking my face under the soft-serve ice cream machine nozzle at my local fro-yo joint again and the fat security guard who is no match for my Usain Bolt speed, even with 3 pounds of dairy in my gut, suddenly appeared with a SelectaDNA pistol and shot me in the leg, could I not just go home and Lever 2000 my leg with a loofah? My guess, based on the fact that I'm not that smart and even I thought of this potential quandary, is the pellets' juice has some staying power, but I can find no specific address of what I would consider this SelectaDNA FAQ. Then again, in addition to being of barely average intelligence, I am also exceedingly lazy so it could be that I'm just not looking hard enough.

SelectaDNA guns come in pistol and rifle forms, differentiated mainly by size, power source, and ammunition capacity. Both have similar ranges. The pistol harnesses power from a 12g powerlet holding up to 20 shots at a time. Pellets come in packs of 14, with each pellet in a pack containing the same unique DNA code (codes differ between packs, and the laws of mathematics state there are an infinite number of combinations available.) During lab analysis, a SelectaDNA reagent kit helps match hit targets to the gun that fired at them.

The High Velocity DNA Tagging System is the newest in SelectaDNA's line of similar products. They also carry a sort of DNA mace that both fends off and marks attackers, as well as a spray for individuals to use in designating personal property--valuables that, if stolen, have a permanent imprint of rightful ownership.

My new tablet? My bulging, Tom-Cruise-in-The-Last-Samurai forearm. Hey, if they can make a laser-powered virtual keyboard that tracks fingers for real-time typing (and sound effects!) why can't they make a bracelet that...

The Havenshield Door Barricade is a home security device for quickly blocking interior access to intruders. It installs over any standard door in your home (or office or classroom) like a wreath. Not exactly a bearer...

Disorienting, blinding, and giving people seizures all serve as excellent forms of distraction during attempts at self-defense and ploys to make off with the $80 giant peanut butter cup cake. Brite Strike's Tactical Balls...

Carlos Schreib created the Espire respirator for professional varnishers and chemical engineers who don't want to work with a heavy filter over their mouth or walk around the office looking like an evil steampunk doktor...

Looks like James Bond and Data from The Goonies are finally making good on that collaboration they've been talking about. What we have here is a smartwatch-controlled pistol. A gun that will fire only if it is within...

I know. If you're not military, law enforcement, or a first responder you can't have a TEC Torch handheld breaching saber tool, but, dude, you can still want it. TEC Torch uses thermal magic, specifically a concoction...

Anymore, the ability to write is a mere secondary attribute of a great pen. I might want to scribble a note to buy more Fresca every now and then, but mostly I'm using pens like POLAR as anything from a magnetic toy to...