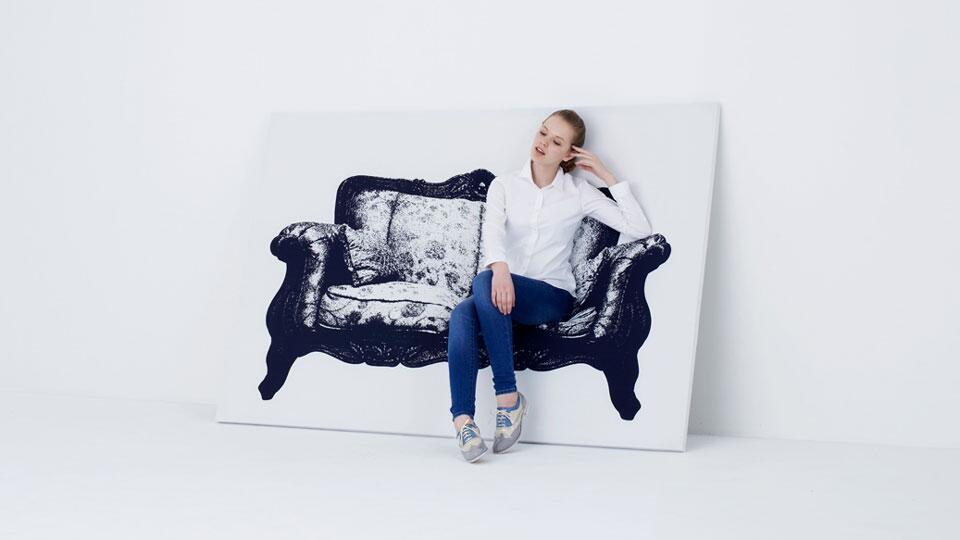 Whoa. That chick just sat in a painting. Can we do that now? How about comics? Is it going to be like Cool World soon? Tokyo-based design studio YOY developed this series of wicked optical illusions whose true nature is as nifty as the illusions they create. Called Canvas, the sofa and chair artwork does more than just take up space on a wall--it serves as real sofas and chairs. They're probably not very comfortable as long-term seating options, and I question whether or not they would support the weight of a strapping man like myself, but I appreciate trickery in all forms not directed at me by a girl I am attempting to sleep with so I still applaud the concept.

Canvas furniture consists of a wood frame covered in elastic fabric, and then printed with the texture of a canvas and completed with a drawing of an armchair or sofa. Painting installation instructions are as follows: lean it against a wall.

Now the important question is, who's hotter: Holli Would or Jessica Rabbit? Even though redheads are kind of a novelty since they're going extinct, I'm picking Holli. Mainly because she has a human body in the form of Kim Basinger, who is still pretty hot despite being somewhat elderly. Jessica on the other hand...do you know whose human body holds the voice of Jessica Rabbit? Ugh, I don't think I can even write her name without losing the ability to get an erection for the rest of the day. If you're OK with temporary impotence, here, have a look for yourself.

I don't know how a real working Invisibility Shield really works, and I don't care. As long as it hides me from solicitors when I lounge in my mama's front yard, my friend Cornelius when I use it to scare the ever-loving...

When Dear Henry tells Dear Liza about the hole in the bucket of this clever pen and pencil holder, he might get a kiss instead of a face palm for once. As a gift for the office, addition to your home desktop, or even...

Novatropes are abstract flower, sealife, and geometric sculptures that get moody when placed over a base with a built-in strobe light. The combination of the moving LED light, a rotating base, and translucent 3D-printed...

HOLHO. It's like a portmanteau of Holla! and Jai Ho! And the contraption is an Italian design, so we've got some real cultural diversity going on here in the world of holograms. A pyramid-shaped structure that sits on...

T3 and T4 are the unassuming names for the very standout Tetris-style couches Sara Hayat includes in her modular furniture collection. A pile of colorful tetromino cushions link together to form a clean, modern sofa...

No, designer Ubald Klug didn't really name this luxe couch the Rolls of Fat Sofa. This dude, the world's most cutting, yet fair, critic did. That's all I see when I look at it. Layers and layers of visceral fat. And...