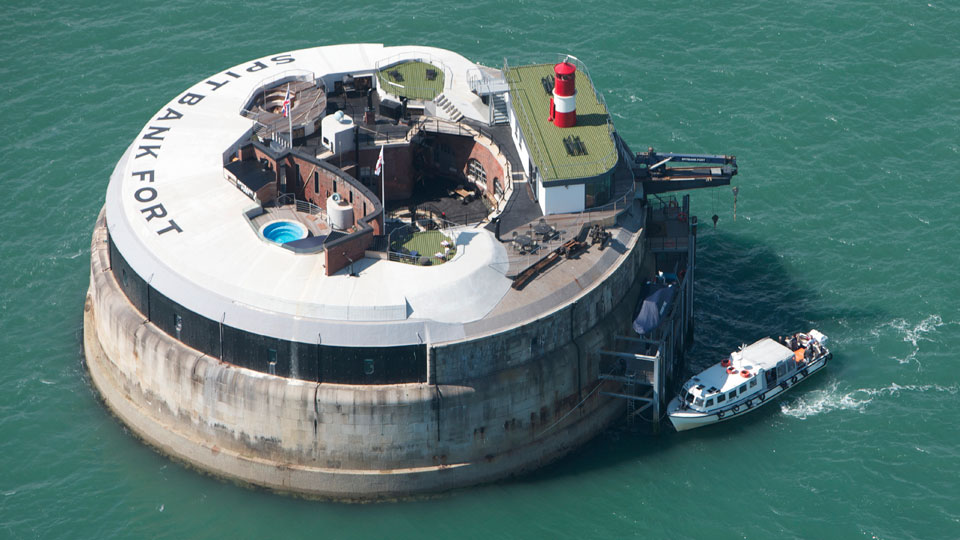 If the UK's Spitbank Fort didn't look and sound like post-apocalyptic luxury at its finest to begin with, its location in The Solent, a major shipping route along the Isle of Wight, should cement the status. The Solent? Is that Beyond the Wall? Somewhere within Panem's District 13? Doesn't really come across as my dream vacation destination at first glance. However, upon further perusal of one of its pimped out floating retreats, if going to The Solent meant a stay at Spitbank Fort, I'd be in there like swimwear.

Spitbank was originally constructed in the late 19th century for governmental and military use. After suffering damage during WWII, the fort was allowed to fall into continued disarray until its purchase and rehab by a private entity years later. Today, its 8 bedrooms and extensive subsurface entertainment areas serve as a posh destination for British weekenders, company events, and grand celebrations counting down to the End of Days. With boats and helicopters departing from Gosport--about a 2-hour drive from Central London--groups can rent the entire fort on a per-night basis, or individuals can pay per person to stay overnight on Saturdays and Sundays.

For obvious reasons, a trip to Spitbank includes all meals and activities, such as dining in the full-service restaurant, getting sloshed in a meandering bar/lounge, or going home even broker than you were from paying the fort's fees in the island's poker room. Recovery from the food, booze, and financial ruin occurs on, from the looks of it, a bitchin' Astroturf deck.

Plat of land, plop down a Honomobo. It's what I keep telling my girlfriend when we talk about trading in her condo for a house. See, like the Simpsons, we live in Springfield, and home prices are ludicrous right now...

When the item in question is a house, how do you define "portable"? For me it was always the train car-looking mobile home my grandma's cousin Ella Mae used to live in that could be dragged from city to city in Florida...

Looper pods deem themselves portable, eco-friendly, pimped-out resorts modeled after the ultimate pimp mascot: the caterpillar. Yeah...I would've gone with some sort of spiny-backed reptile or ancient dinosaur or Bowser...

I'm nearly sold on AbleNook, a collapsible housing unit that requires neither appreciable time nor skill to assemble, based on its Kickstarter project's opening quote alone. From Albert Einstein: "We can't solve problems...

Industrial design firm 608 Design and architectural design firm BLDG Workshop teamed up to build the Bunkie, a portable, eco-friendly, prefabricated retreat structured such that the Big Bad Wolf will pop many a cranial...

How has a house-shaped inflatable tent like AirArchitecture not been the most popular camping shelter for years now? It makes every other tent look like only the measly roof got plopped on the ground. And even Heimplanet's...

The Cocoon 1 is for that sort of selfish kind of privacy people seek. The kind that means no one can bother or make any demands of them, but they can still watch and hear and pass judgment on what's going on with everyone...