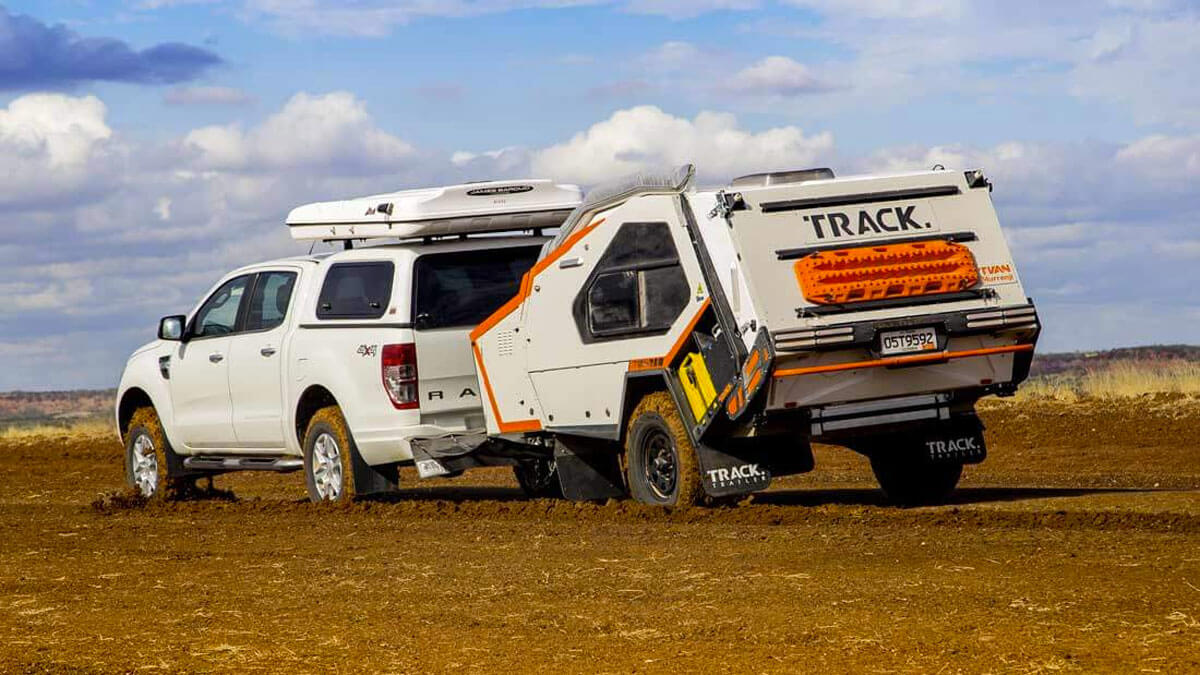 This is Tvan, and if you're barreling through dirt and rocks with one of the off-road camper trailers bounding along behind you, then you're Tman. The Man. The one who's got the beauty and freedom of the path less traveled ahead of him, and the military grade MC2 Suspension to support going down it out back.

The Tvan MK5 is the latest Tvan Camper Trailer release from Australian recreational vehicle company Track Trailer. Originally launched in 2000, the Tvan's off-road power and wicked look put it on the RV map, and it's been rolling through the outback, picking up various performance awards along the way, ever since. The MK5 stays true to the rugged, compact, easy-to-use foundation of the design, but adds a slew of upgrades to the MK4's body panels, electrics, sleeping quarters, and kitchen variants.

One of the Tvan's primary bragging points is its sleeping space. The Camper Trailer allows for sleeping on a queen-size mattress, and under a hard roof with walls - no flapping canvas - that provide protection from weather and bugs, plus noise insulation. You can also double your living space by deploying the stored tent, which adds some "flapping canvas" but is attached to a fold-out hard floor to keep you dry and off the ground.

The Tvan MK5 also has:

Oh, Poler Reversible Napsacks, you knew you had me at trippy colors and patterns of Rainier Beer. These camping and lounging companions certainly aren't the first wearable sleeping bags or blankets to take a seat at the...

What makes Ultimate Toys' Ultimate Camper so...ultimate? Well, the teardrop trailer comes with a shower-equipped bathroom, a convertible queen-sized bed, not one, but two kitchens, and, of course, the Ultimate branding...

Ready for some adventure, mate? The AM-V2 from Adventure Mate is a 5-in-1 multi-tool ready to help you chop up, shovel up, hook up, hammer down, and saw through the outdoors. But, like, in a nice way...

DFACKTO makes a whole series of burly chef's knives, combining many of them into different collections, including the trio of rugged chef's knife sets I'm spotlighting here. The 11-piece Mobility, 11-piece Nomad, and...

The 14 coolest campers, RVs, trailers & caravans: coming to a road trip near you in Summer 2020. You, plus thousands and thousands - and thousands! - of your fellow vacationers...

I've run a ton of campers, trailers, RVs, and caravans like the Escapod TOPO2 over the past couple of years. Are you dudes tired of road trippin', off-griddin', travelin' on the cheap recreational vehicles yet?...