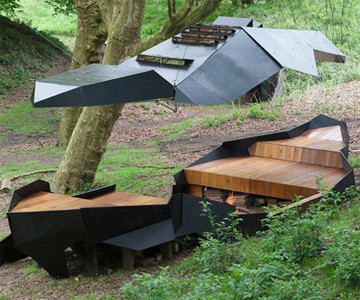 Dutch artist Paul Seger's Stealth Pavillion is an art installation and thematic exploration of heterotopia, the idea of anti-space within a expressed context. I know. I hate it too when people define a word that doesn't mean anything to me with other words that don't mean anything to me. So for our purposes, I will describe the Stealth Pavillion as a flying interstellar pod that Batman built when Superman invited him to play bocce on Krypton, and then later donated to humans to convert into a sweet BBQ pit.

Currently on display in Groenekan, Netherlands, the Stealth Pavillion figuratively incorporates the "stealth" technology of Lockheed Martin's F-117 Nighthawk. As the Nighthawk deflected radar signals to remain undetectable while in use, the Pavillion encompasses the concept of thwarting recognition and creating a "free zone" in these times of everyone (ahem, Facebook stalkers and US government organizations) being all up in everyone else's business. Seger's aesthetic nod to advanced aerospace equipment reflects his belief that this sort of privacy can no longer be accomplished without the aid of extremely complex and high-tech systems. Seger should mind meld with Adam Harvey, creator of computer vision camouflage concept CV Dazzle and counter surveillance clothing line Stealth Wear.

The literal composition of the Stealth Pavillion consists of decidedly simple materials, including steel, aluminum, and wood. The structure measures 29.5' x 9.8' x 13'.

DFACKTO makes a whole series of burly chef's knives, combining many of them into different collections, including the trio of rugged chef's knife sets I'm spotlighting here. The 11-piece Mobility, 11-piece Nomad, and...

11 of the Best Backyard Fire Pits

Well flamin' pits and great bowls of fire! Here are 11 of the best backyard fire pits, here to ignite your date nights, goo up your s'mores nights, and make your warm summer nights just a little warmer...

Bricknic modular cooking bricks have many qualities I would endorse, but the coolest thing about these clay culinary tools is that you can fill them up, stack them up, and fire them up to build your own brick oven. Whose...

Go from BRRRR to GRRRR. It's called Russian-Bear because that's who makes this cold-weather-ready hot tent with stove jack, but I think also because as soon as you get your wood stove a-glowin' inside, I'll bet many a...

But can these fire dragons roast marshmallows? Maybe not with their breath, but Campfire Flyers, kinetic dragon sculptures powered by the flames of your campfire, could probably be rigged to hold the sticks...

A Cowboy Cauldron brings together folks from all walks of life. Wranglers can cook out with witches. Dudes from the ranch can grill with dads from McMansions. Fantasy fans can warm their hands across the fire pit from...

Using the Logmatic is kind of like digging a hole. Through a tree. The un-axes, or rather, Wedge Axes, are ergonomic hand tools designed especialy for splitting firewood and kindling. Place your Logmatic's flat head on...

Hmmm, I think I just found a way to make some extra cash this summer. A full kitchen in the trunk for me means Cuban sandwiches, carnitas tacos, and five spice duck congee for all of you festival and beach goers. Or maybe...

The Bison Airlighter ejects a 4" flame to ignite charcoal and wood, and then blows a shot of air into its ear to spread the fire and get it really hot. As an air-driven lighter it claims to be faster, cleaner, and safer...

A Hand Machined Fire Piston is the best Christmas gift for the best part of after Christmas: the Christmas Tree Bonfire. My friend Mikey Z holds one every year, inviting all he knows to bring their dead, dried-up firs...

Solo Stove's latest release, the Bonfire backyard firepit, is one of the hottest campaigns on Kickstarter right now. At printing it was flaming with over $200,000 in backer pledges, smoking its $15,000 funding goal and...