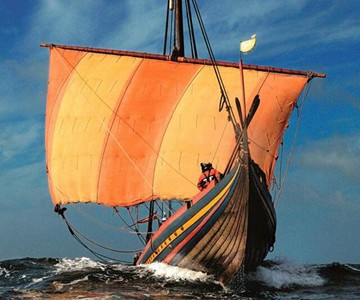 Have you always dreamt of owning your own authentic Viking ship, built by craftsmen in the ancient Nordic capital of Roskilde? Well I hadn't really given it much thought before, purveyor of fine Scandinavian gifts CultureNordic, but now that you mention it...hell yeah I want a hand-built Viking ship! I'll need a Sweyn Forkbeard costume too. And probably a cosplay convention somewhere other than Indianapolis.

The Viking Ship Museum is now taking orders for wood-hulled Viking ships in a variety of models. They range from single-seaters to gargantuan. The boats' reps say, Why not go for the full battle cruising Gokstad Ship measuring nearly 10 meters?! And I say, Ek veit! How about because its estimated cost is $216,715.20!

Indeed, authentic Viking artifacts are incredible, but they are not cheap. All are priced on demand according to construction methods and buyers' specific requests, but as general guidelines CultureNordic notes ballpark figures as follows:

Actual prices will depend on the manner of production. If that too is to be authentic, with boats built completely manually as they were during the Viking Age, both the hours required and resultant prices will be exorbitant to the power of the number of people Egil Skallagrimsson slew whilst writing epic poetry. If modern building processes are incorporated into the effort as well, pricing will scale down to slightly less exorbitant. Like, maybe just to the power of Skallagrimsson's kills during his teenage years.

Egil Skallagrimsson Fun Facts: the exiled Norseman went on a killing spree after being ejected from his homeland of Norway. He managed to live fearlessly as a homicidal poet into his 80s. He died in peace. After he killed the slave he made help him bury his treasure.

The BeTRITON Amphibious Camper-Trike is finally taking after the first Little Piggy and going to market! Formerly known, and seen here, as the Z-Triton, this 2.0 upgraded and rebranded recreational vehicle is still 100%...

Ark up, Noah! It's time to seek out two of every kind of party animal you know, and lead them onto the Arkup Livable Yacht, a floating home that motors from dock to dock, sea to sea, and tropical paradise to coastal city...

When the tiny home fad caught up with Quebec-based boat builders Daigno, I'll bet it didn't take them too long to conclude that the only thing more adorable and romantically minimalist than a tiny house is a tiny house...

Were these sweet (cheeked) Butt Buoys used in the making of Weekend at Bernie's? If not, they should have been. Ahhh, nothing screams 80s class louder than a PVC anchor marker fashioned in the shape of an inverted lady's...

In a way it sucks that the Black Swan Superyacht is just a concept right now because that means its technologically-advanced, supremely-luxurious, ninja-shark-looking self doesn't really exist. But in way it's good too...

Normally, a great warrior wouldn't want to see his sword blade bent and wrapped into a big "O." But in the case of this Sword Cuff Bracelet from Osiris Jewelry, I think, whether viking, medieval knight, or Geralt of Rivia...

You won't be able to glide through the salty sea in a Pakayak this summer, but you should at least be able to pledge your loyalty to what the company is calling the world's first nesting kayak. The Pakayak's Kickstarter...