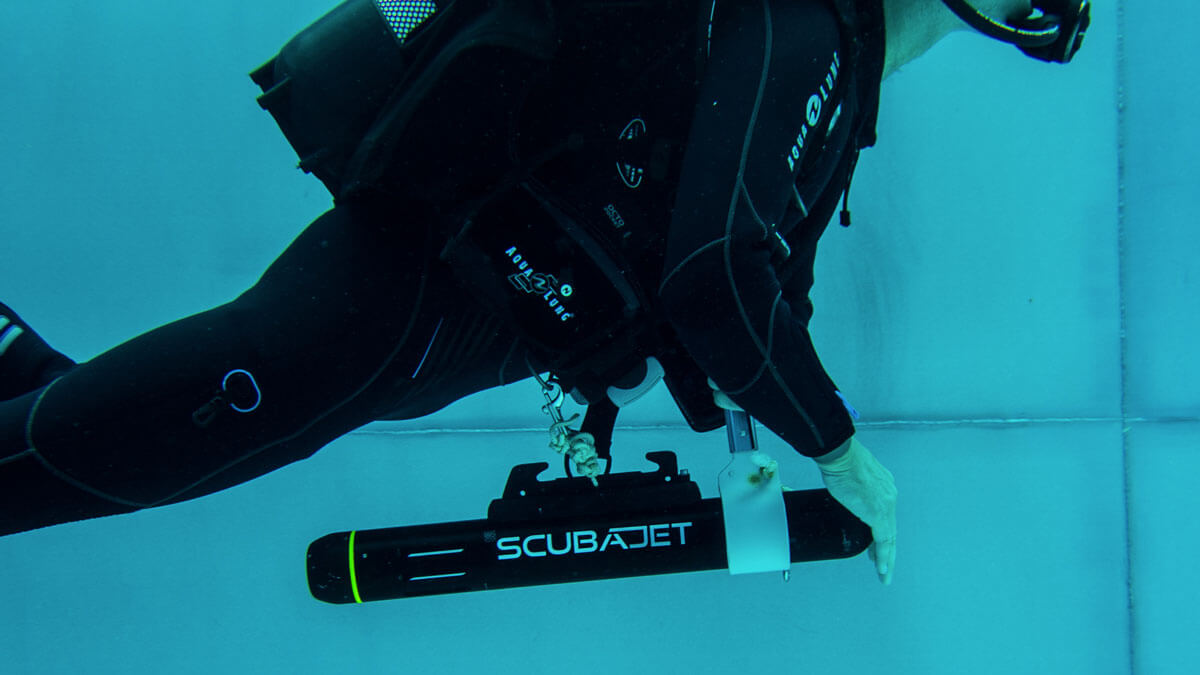 SCUBAJET is a new underwater scooter for propelling your person while diving. You can also attach the water jet to small watercraft, such as a stand up paddleboard, canoe, or kayak. No word yet on whether or now it's compatible with the Inflat-a-Bull, but the Austrian company developing the SCUBAJET will begin shipping them in August, so you could be the first to find out.

We've seen these types of jet propulsion systems for subsurface good times before in the Underwater Jetpack and the BladeFish personal water jet, but the Jetpack is designed exclusively for swimming and diving (and costs twice as much) and the BladeFish peaks out at speeds of 3MPH.

While not without limitations, and not cheap itself, the SCUBAJET offers the same portability and ease of use as its peers, with more versatility and power. It weighs just 6.6 pounds on land, so basically nothing in water, and has optional remote control for when it's mounted to a board or boat. And it can scoot you along at up to 10MPH, with 44 pounds of thrust.

SCUBAJETs come with either 200W or 400W batteries, with run times per charge that vary significantly base on your activity and speed. For boat / board safety they have an auto-shutoff system that stops the jet immediately if you fall into the water.

Diving free of cumbersome tanks and lines, and with an unlimited underwater air supply? That's like...like...making love out of nothing at all. Unfathomable! And although human gills are indeed a ways away from sporting...

Ahhh. It's a see-through canoe/kayak that seats two and provides the perfect setting for a romantic, yet adventurous date of paddling the high seas and taking in all of its technicolored fishies, regally swaying anemones...

I'm probably not the best dude to talk about the STAR Slice Paddle Cataraft, as I don't really care for white water rafting, or rapids, or, like, water. It's not that I'm afraid of water, per se. I welcome it, for example...

Inflatable ad convertible, the BOTE Deus is a double dose of kayak and stand up paddleboard that goes from 39" travel bag to 12'6" boat in minutes. While weighing just 50 pounds thanks to military grade PVC construction...

Pontos is tossing their packable kayak into the mix of small vessels debuting for Summer 2022's boating season. And I mean, literally tossing it. The Pontos kayak weighs only around 7 pounds, and packs down to a size...

Supermarinovation asks, "Have you ever been snorkelling and seen something incredible below you, but haven't been able to get to it before your breath runs out?" To which I say, "Sure." And follow up with, "And have you...