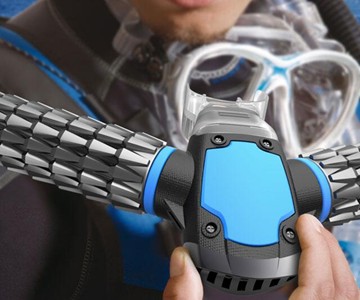 Diving free of cumbersome tanks and lines, and with an unlimited underwater air supply? That's like...like...making love out of nothing at all. Unfathomable! And although human gills are indeed a ways away from sporting goods store shelves, with his TRITON oxygen respirator concept, Samsung Art & Design Institute student Jeabyun Yeon may ultimately prove himself to be the game-changing Australian soft rock duo of the industrial design world.

Yeon proposes a solution both to humans' natural inability to breathe underwater, and the complexity of learning to operate/using assistive apparatuses, such as SCUBA gear. His TRITON mouthpiece aims to eliminate both the extensive equipment and the restrictions by enabling subsurface breathing just by biting its pliable insert. In addition, the TRITON is designed to be a portal oxygen respirator, which means those wearing one would breathe just as they do on land, rather than learning to consciously and deliberately breathe in and out when the device is in place.

TRITON would incorporate artificial gill technology, which Yeon claims is in development in Korea, as its primary feature. A filter on the mask would extract oxygen while under water with a collection of fine threads whose holes are smaller than water molecules. From there, a tiny, powerful micro compressor would condense and store the extracted oxygen in a compact holding tank for continuous access over a very long period of time. Limits would be due only to the micro compressor's micro battery, again a piece of next-generation technology. It is anticipated to be 30 times smaller than current options, and capable of charging 1,000 times faster.

Later That Day Update: For those who aren't familiar with it, the virtual gallery displaying Yeon's TRITON is Behance. Behance is a venue for artists and designers--particularly students--to showcase their projects and ideas, generate interest and support, build networks, and potentially attract investors. Many of these products still exist only as prototypes or concepts, but the work their creators have put into them certainly places them beyond the stage of All Talk & No Action that people such as myself will thrive in forever.

Who wants to wheeze like a fat asthmatic chasing down the ice cream man? I do! I do! Temporarily anyway. MMA master and onetime UFC Heavyweight Champion Bas Rutten developed his O2 Trainer to build strength in a part...

Supermarinovation asks, "Have you ever been snorkelling and seen something incredible below you, but haven't been able to get to it before your breath runs out?" To which I say, "Sure." And follow up with, "And have you...

Many of us dig communing with corals and fishes and hot merpeople lookin' for a good time 40 feet beneath the ocean's surface, but suited up SCUBA-style in bulky BC vests and heavy oxygen tanks sort of encumbers the experience...

The high altitudes of Nepal, Machu Picchu, and Denver may naturally administer pulmonary resistance that conditions human lungs, and improves athletic endurance, but who wants to spend the time and money to travel there?...

Bite down on a Scorkl and you'll score 10 minutes of untethered underwater breathing. No snorkel confining you to a foot below the water's surface, and no loading up with a 35-pound SCUBA tank and BC like an aquatic pack...

Ever wondered what it might be like to have webbed fingers? Wonder no longer. These durable latex rubber gloves will have you flying by other frogs in the water. Perfect for SCUBA diving, swimming, surfing, and even jumping...

The Exolung is a prototype for an underwater breathing device that gives shallow-water divers the freedom of a SCUBA, without all of the elaborate equipment. More probably, it will be the snorkelers who swim towards Exolung's...