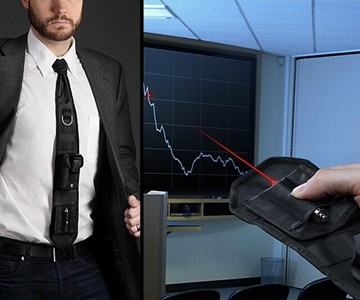 Does a necktie equipped with a laser pointer and MOLLE system take the current tactical fad a step too far? Yeah, but...I kind of want one, so...on second thought, definitely not. ThinkGeek's tactical tie is fitted with a real Class II red laser pointer in a removable pouch, plus a second removable flapped pouch with quick-release buckle for storing Skittles and pre-moistened spit balls to throw at anyone who appears to be texting or nodding off during your presentation. Made of black nylon, the tie also incorporates a plastic D-loop in case you want to hang keys or a phone or a 20-ounce water bottle from it for further convenience and progress towards building Incredible Hulk neck muscles.

I guess the one downside of the laser pointer necktie is that it's incredibly ugly. I mean, I'm pretty sure Archer would deem it an egregious affront to the male wardrobe. Then again, Inspector Gadget and MacGyver would probably approve. So I guess you just have to decide whose opinion you value more: designer suits and turtlenecks, or trench coats and mullets.

The tactical necktie with laser pointer is a top Dude Gift for a Geek and Gift for the Office pick.

Let me axe you: do you need a tactical tool with an SK-5 carbon steel blade and glass reinforced nylon handle to assist you in your camping, survival, or other outdoor pursuits? Would it sweeten the pot if this tool were...

Stealth. Stamina. Sniper sight. And that's just the M4 Tactical Crossbow itself. Like, before taking into account the litany of powerful, valiant, not-to-be-F'd-with characteristics Cornelius and I will bring to the table...

Bomber & Company invites you to upgrade - or perhaps, upblade - your everyday carry with their B-2 Nano Blade. They say, at less than 1 ounce, the pint-sized pocket knife is the world's lightest fully locking nano blade...

Designer Rainer Wenning calls his Waves MFS a "physio-tactical" palm stick, which might be the best bit of pretentious, made-up terminology I've ever heard. Because what "physio-tactical" basically means is that after...

The MecArmy PS14 is a 1200-lumen tactical flashlight able to shine its super bright beam, in full, around 330'. It is IPX8 water-resistant for use even in heavy rains, and even has a trident tail section for emergency...

UZI incorporates a few different tools into its Defender line of pens to award them the "tactical" buzzword. This version, the TACPEN6-GM has a glass breaker and handcuff key fitted to its lightweight aircraft aluminum...

Who needs a Tactical Belt-Mounted Egg Holster? I'll tell you who. Tired of working his cottontail off for weeks decorating eggs in elaborate patterns all the colors of spring, only to have a good third of them break before...

While I do not believe in buying other people gifts in honor of holidays for which they do not also have to buy me a gift, Father's Day is on the horizon, and this Tactical BBQ Apron could perhaps serve the dual purpose...

Are you sick of real estate agents getting aerial footage of new listings in your area? Drone Shield has you covered. Finally a safe way to bring down those quadcopters from the sky without having to fire a single shot...

It's military-strength protection for your beer this summer! These tactical vest beer koozies, complete with MOLLE attachments for toothpicks, cigs, and lime wedges, might be pretty cheesy, but the cheddar they're oozing...

The StrongArm fixed blade isn't a new design for Gerber, but their latest release in the knife's series now has an upgraded BDZ-1 steel blade. Full tang and fine edge. The StrongArm's Tactical Grey handle also has a rubberized...