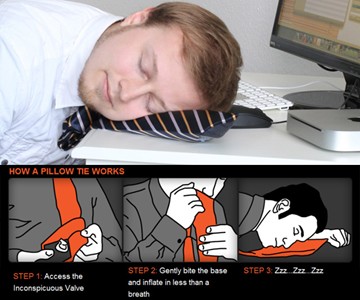 Neck-to-pillow contact : Kelly Brook :: Neck-to-tie contact : Rosie O'Donnell. Therefore, neck-to-Pillow-Tie contact = hmmm, Zooey Deschanel? Or maybe topless Anna Paquin. Listen, Pillow Ties are not a substitute for down or memory foam headrests. They have about enough surface area to accommodate an ear and half a cheekbone, and their cushioning capabilities are effectively a product of their wearers' breath. Which most likely reeks of the 64 ounces of last-ditch caffeinated effort said wearers drank prior to abandoning all attempts at productivity in favor of passing out on their Herman Miller office modules, nestled--and drooling--into their inflatable neckties. But, hey, at work, on an airplane, trapped in a closet, the portable and subtle sleep aids are nothing short of godsends.

Pillow Tie outer fabric is a boardroom blend of microfiber and silk, while the removable inflatable insert comprises the same durable PVC plastic used in traditional relaxation devices, such as pool rafts and blow-up dolls. When not aiding in nap action, the tie's Clark Kent alter ego ensures its slumbering powers and plastic inflation valve remain hidden, allowing the neck accessory to enjoy anonymity amongst its fellow symbols of the corporate rat race. Ties come in many pre-selected, as well as player's choice, colors and patterns. They promise not to bleed on your white shirt, or wrinkle easily, and they are proud to be soft, giving, and supportive, even to users with abnormally large heads of up to 25 pounds. While the inflatable piece can be removed from the Pillow Tie, it is not compatible with plebeian ties made by the likes of Armani and Bill Blass.

Remember that one time you let some chick drag you to hot yoga because she too was hot and you wanted to see her do bendy things in spandex pants, but then you ended up spending the whole class lying on your back trying...

I don't wear my heart on my sleeve, I wear my nap on my sleeve. The Sleepy Sleeves Wearable Arm Pillow is an alternative to neck pillows and giant ostrich heads for travelers and tuckered-out workers eager to grab some...

Ginger Foot Pads give new meaning to the expression, "Sleep it off." Or attempt to, anyway - reviews are mixed on how well these overnight detoxifiers really work...

The actual name of this product is Moonlight Pillow. Really? Has the moon been eating Skittles? Did it swallow a gay pride parade? Because the moon I look at has certainly never gleamed the entire Roy G Biv rainbow. Except...

If the Ostrich Pillow doesn't provide enough coverage and anonymity for your power naps, how about the patent-pending Sleep Suit? Designed by Architect Forrest Jessee as an experimental medium for testing out Buckminster...

Varier's Gravity balans may not be new, but it remains Zero Gravity Recliner 1.0. The Original. Like Sean Connery as Bond. Like the Swedish version of The Girl with the Dragon Tattoo. Like Shannen Dougherty in 90210...