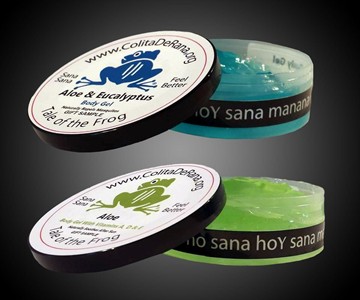 Colita De Rana can't do much about karma, which will just find another way to beat you down, but its all-natural, alcohol-free aloe vera gel can ease the pain and skin dehydration that follow a sunburn. The blue version of Colita De Rana's after-sun salve can also keep the mosquitos from tag-teaming the assault with its addition of bug-repellent eucalyptus.

The name "Colita De Rana" refers to a 500-year-old Latin American legend wherein natives of Ecuador showed the Spanish how a rainforest frog's secretions could be used to soothe aches and pains. Now, the polite translation of "colita de rana" is "tail of the frog", but obviously frogs do not have tails. So. I think you can see where I'm going. But I'm doing it only so that I can assure you there are no actual rainforest frog "secretions" in this Colita De Rana aloe vera gel. They are similar only in name and in healing properties.

Blue Colita De Rana adds Eucalyptus Globulus leaf oil to the above to serve as a natural bug repellent.

The Black+Decker Bug Zapper is an insect killer that looks as handsome as the house flies, mosquitoes, gnats, and wasps it bzzzzt!s will look nasty lying dead in a pile in the zapper's collection tray...

Do you often set out to enjoy a BBQ or camping trip only to find yourself trading in the anticipated revelry for a full-scale, hostile, bug-obliterating offensive? OK, well do you tend to step outside on a pleasant summer...

Hot time, summer in the city / If you get burnt, ain't gonna look pretty. But maybe it will hurt a smidge less after you rub on some of Bath N Bailey Works' Organic Sunburn Relieving Salve...

Panama Jack left the neon zinc oxide sunscreen game too early. Now that fluorescent orange, yellow, and pink are back--in a full-on, legitimate, non-humorous, non-ironic sort of way no less--I have to give a shout out...

Beat it, skeeters! ... Or at least stay the F out of my van down by the river. The Skeeter Beater is a magnetic screen cut to fit over vehicle windows of various shapes and sizes so your car, truck, SUV, van, or RV stays...

Full Face Mirror Sunglasses are convex configurations of UV-resistant PC panels and UV400 lenses made to protect not just your eyes, but also your nose and mouth, from the blinding and burning rays of the sun. And maybe...

Say WassSom, bra?! to fellow surfers, sunners, partiers, and greasy dudes leering at bikini-clad co-eds on the beach this Spring Break. The Sombra Shade beach canopy is a lightweight, low-profile sun blocker made for...

Summer music festivals, baseball games, and days in the park with the kids are about to get a whole lot jollier. Instead of SPF 30, this innocuous bottle of responsible adult sunscreen contains room for 8 fl. oz. of ABV...

Stung by a bee? Bitten by a snake? Suck it up, son. Or rather, suction it up. With [cue appropriate vacuum pump music]...The Extractor!...

Some people still think that if you get bitten by a snake you should use the cut-'n'-suck, or cut-'n'-have-your-friend-Cornelius-suck method to remove its venom. But really this is just a good way to send the venom back...