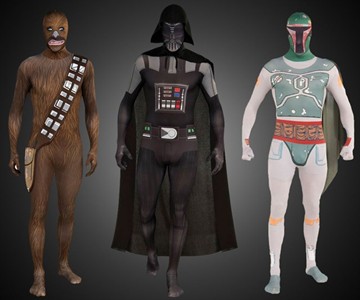 Costume Craze has released a whole line of Second Skin Star Wars suits for 2013, but I feel like if a man is going to put a definitive outline of the family jewels on display, the face of a Wookiee would complement them much better than would the face of a treacherous bounty hunter or a traitorous absentee dad. So the clear favorite here is the Second Skin Chewbacca Suit, wearable in head-to-toe glory. Chewie's face is sort of weird--I probably would have given him an upper lip reminiscent of something other than a graph of the United States' economic downturn--but I guess Lycra as an artistic medium has its limitations.

As alluded to, other Second Skin additions to the Star Wars costume line include Darth Vader and Boba Fett. All sets come with the suit, a hood/mask, gloves, and socks. Huh. I was hoping they'd be onesies.

Muchas danke as well to my friend Maurice for pretending to go get ice cream, and then using butterfly-patterned duct tape to resecure the hunk of back bumper that's been hanging off my car for the past 4 months.

Unlike a few selections in this slideshow of sick motorcycle helmets, you can probably wear HJC's new RPHA 11 Boba Fett helmet without getting laughed off the road (it's an obvious, but not over-the-top Star Wars circus...

When mere pushing, grunting, and clenching every other muscle in your body while sitting on the toilet doesn't work, use the Force. Or at least stare at this Use the Force bathroom art hanging on the wall for some comic...

Life has been very difficult for some since the Mark Ecko reversible Chewbacca hoodie sold out. It was pretty much the Star Wars garment to end all Star Wars garments. But I like this new alternative alright too. Maybe...

Vader, I hope you like the taste of crumbs and dripped condiments, the feel of beer glass condensation, and the smell of feet, because you're about to get a face full of all of them muggin' it front and center on this...