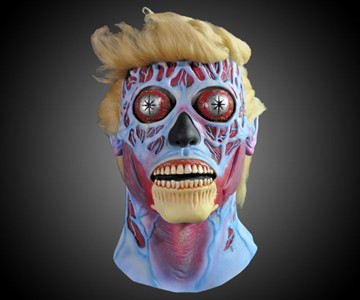 Remember John Carpenter's They Live? If you weren't into aliens and kitschy (yet poignant!) social commentary in 1988, the film suggests that America's "rulers"--the rich, the powerful, the elite, the CEOs and politicians--are actually grotesque aliens hiding behind human faces. Their purpose: using subliminal messages transmitted through mass media to control the rest of us. Manipulate us into spending money, breeding, and accepting our lives of mediocrity.

They use the media to conceal their appearances too, hiding behind a signal projected from a major network's tower.

Timely time to revisit the plot of They Live, huh?

Trick or Treat Studios even takes it one step further. The 2016 elections will surely encourage throngs of political costumes this Halloween, and the frontrunner of those will surely be Donald Trump. But you'll still stand out amongst the billionaire masses if you go for one of Trick's Trump masks, which they've (brilliantly) given the They Live Alien treatment.

The They Live Alien Donald Trump mask is part of a limited edition, and at printing was up for pre-order, with shipments heading out between August and September 2016, in plenty of time for the big presidential spectacle on October 31. And again on November 8.

This popcorn kernel stuck in my teeth is gonna be the death of me! Ironic, because it looks like one of the toothpicks I need to dig it out was the death of this guy. The Skull Toothpick Holder makes a fun 'n' spooky...

How have I never heard of a Screaming Aztec Death Whistle? In all my efforts to exact revenge on my ex-girlfriend, Karen, in all my attempts to prank my friend Cornelius, in all my ploys to convince my mother-in-law our...

When Batman got a helmet it made Predator all jealous so he whined to NLO Moto, "WTF man? First he gets the higher budget movies and legitimate actors and then DC rejects my idea for a The Dark Knight v. Predator crossover...

It's The Brotherhood of Evil Mutants' most famous defector in living, non-Anna-Paquin form! This milliskin Rogue jumpsuit is made to order in your choice of kotobukiya with green details, classic with black details, and...

While definitely funk and futuristic in its appearance, the BioVYZR 1.0 - which, by the way, isn't even from the land of funk that is Japan, it's from Canada! - is nowhere near the craziest face mask or headwear EDC I've...