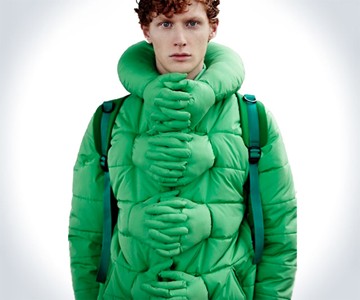 Well, maybe it's just called the "Hold Me" coat, but this bizarrre gem from Si Chan's fall collection of handsy fashion looks like a line of little green men flanking the zipper--and the wearer's torso--to me. Chan explains his line of spooning upper extremities is intended to illustrate the (dis)connection between people, and the resultant loneliness they may feel. Whoa, heady stuff, dude. I kind of think the Hold Me Coat represents another weird piece of haute couture weirdness that would happen to make a pretty sick costume in cities where it's cold as a well digger's asshole on Halloween or during Comic Cons.

My 2020 roundup of 18 no-fail gifts for women should have something for every special lady on your list. And even un-special ladies, like your mother-in-law and Karen...

I am drawing this Ex-Boyfriend Revenge Kit to the world's attention only so that if anyone sees a woman carrying a bluish-greenish colored purse you'll know to report her immediately to a shrink, the police, and Batman...

Men, say it with diamonds. With chocolate truffles. With roses. Ladies, say it with beef. Jerky. In the shape of flowers for good measure. Because even though nothing will tell your man's belly how you feel more than...

Ladies and their lady parts must really like this Womanizer contraption and its suction cuppy O-face of a tip because this is one sex toy I keep: 1) reading about in major publications; 2) hearing all my girlfriend's...